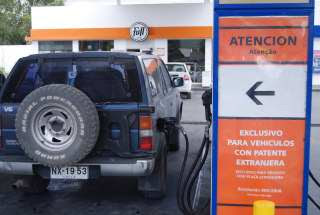 Yesterday I drove from Punta Arenas, Chile, to El Calafate, Argentina, via Río Gallegos, a distance of about 550 km. As a motorist with a 4WD vehicle (which I use while researching my guidebooks), it was a relief to cross the border, but Argentina's low energy prices have their own additional cost.

Obviously, Argentine prices are below world-market, in a country that is nearly sufficient in oil and satisfies almost 90 percent of its energy needs through hydrocarbons (in the subtropical north and a few other areas there is hydroelectricity, along with some nuclear power). As it affects the Argentine consumer and the booming tourism industry, though, there are additional complications in the matter of petroleum

Chile imports nearly all its petroleum, though the Magallanes region (of which Punta Arenas is capital) does have a small gas-and-oil industry. In Argentina, though, the Patagonia region (primarily Chubut, Santa Cruz and Tierra del Fuego provinces, plus parts of Río Negro) gets favorable treatment: there is no tax on gasoline, which costs about 2.20 Argentine pesos (95 octane) in most of the rest of the country. This is about US$2.70 per US gallon, still low by world prices.

The rationale for this disparity, apparently, is that sprawling, thinly populated Patagonia needs a subsidy for its well-being, but Patagonia is also one of Argentina's most prosperous regions, as anybody viewing the breakneck construction of hotels here in El Calafate might well conclude. On the other hand, residents of impoverished northern provinces such as Catamarca, La Rioja, and Tucumán pay full energy prices, by Argentine standards at least.

When foreign tourists become involved, though, it's sometimes another matter. Last year the Argentine federal government announced its intention to raise diesel and gasoline prices for vehicles with foreign license plates in "border areas," which it defined very liberally. The province of Mendoza, among others, screamed bloody murder as it's been the beneficiary of huge numbers of Chilean tourists. Eventually, the feds backed down and, for the most part, they limited the tourist penalty to diesel vehicles (which must pay the fuel price of the neighboring country). International truck traffic also pays the penalty, in much larger quantities obviously, because of their ostensible use of "contraband" Argentine fuel in foreign countries (Brazil, Chile, Uruguay).

My vehicle uses gasoline but, earlier this year, I found myself in the city of Colón, near the Uruguayan border. On seeing my Chilean plates, the attendant directed me to a different pump on the rationale that I would have to pay Uruguayan prices for my gasoline. Not wanting to do so, I asked him what would happen if I continued down the road and suddenly ran out of gas, returning with an empty gas can--would he fill it at Argentine prices. Yes, he said, he would, as long as he wasn't pumping it into a vehicle with foreign plates. I drove about 100 meters down the road and returned with a 20-liter gas can, which I filled with enough fuel to take me to Buenos Aires province, where differential pricing did not prevail.

What has happened is that, in its eagerness to eliminate ostensible "contraband" in fuel, Argentina has enlisted 18-year-old pump jockeys as customs officers. It's not surprising that such measures would encourage scofflaws (such as myself in this case, observing the letter of the law but evading its spirit). Because of such distortions, Argentina continues to bewilder foreigners such as myself, who enjoy the country despite its quirks. If it does too much of this, though--differential pricing often occurs in the hotel sector and even in restaurants in tourist areas--the country could be shooting one of its own most flourishing industries in the foot.
Posted by Wayne Bernhardson at 2:14 PM