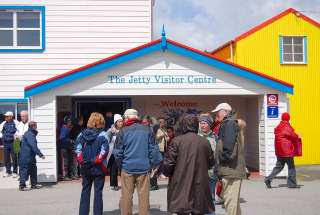 Having not posted anything since last week, I'll try to catch up on the travels that have taken me to and around the Falkland Islands as "insular Patagonia," with great similarities to southernmost Chile and Argentina, but also dramatic differences which I may not have time to explore in this post.

Twenty years ago, in 1986-87, I spent 13 months in the Islands under a Fulbright-Hays fellowship as I researched my PhD thesis. At that time, the only way to reach the Islands was a twice-weekly Royal Air Force flight from Brize Norton, in Oxfordshire, via Ascension Island. Now, though, there's a regular Saturday flight from Punta Arenas with Chile's highly reliable LAN Airlines. Those flights run extremely full, however, so anyone wanting to visit the Falklands should reserve as far in advance as possible (LAN would like to add flights, but Argentina has vetoed additional flights, which must cross Argentine airspace, because of Argentina's territorial claim over the Islands, which it calls the Malvinas).

Travel and tourism are booming here, though, in the context of a thinly populated archipelago with only about 2,500 permanent residents--but millions of penguins and other seabirds, and large numbers of marine mammals, including elephant seals, sea lions, and fur seals. Hotels are few and logistics are complicated, many of the best wildlife sites are reachable only by air taxis, so the number of land-based travelers is relatively small.

Not so with cruise ships. The day before yesterday, three cruise ships disembarked some 4,000 passengers in Stanley the Islands' "capital village," which has only 2,186 permanent residents. There was concern that the invasion would overwhelm the town, but at the end of the day everything went smoothly even though the big ships can't enter the inner harbor here and have to shuttle passengers to land.

Over the course of this southern summer, the local tourist board anticipates some 80,000 cruise ship passengers will visit Stanley, usually en route to Antarctica or around the tip of South America. As local government collects a £15 landing fee for each one, this means revenue of £1.2 million (US$2.5 million approximately).

I arrived in the Islands last Saturday on the LAN flight and will return to Punta Arenas this coming Saturday. A week isn't much, but I've managed to get to offshore Saunders Island to view rockhopper, gentoo, and Magellanic penguins, and black-browed albatrosses, among other birds, and to Cape Bougainville on East Falkland to view sea lions in addition to more rockies, king cormorants, macaroni penguins, and other birds.

It's worth stressing that anybody intending to visit the Falklands should try to fix an itinerary in advance because of the limited accommodations and the necessity of flying air taxis to many of the most interesting wildlife sites--the government air service's number of planes is limited. Also, unless you have arranged at least your first night's accommodation, immigration may be reluctant to admit you.

It's also worth adding that the Falklands are an expensive destination--the local pound is equivalent to the British pound, and prices are at European levels for accommodations and meals, though there are some budget options. Still, for anyone interested in accessible austral wildlife, it's cheaper than a cruise to Antarctica.

Anyway, more about the Islands in the coming days.
Posted by Wayne Bernhardson at 3:08 AM