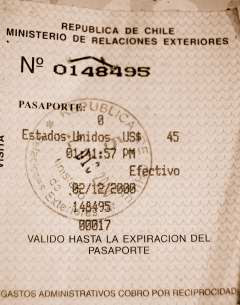 The United States has just raised the fee for a US visa application to US$131. As I believe in encouraging rather than discouraging international travel, I find this reprehensible, but it's not the only obstacle--visa applicants must travel to a US Embassy or consulate for a personal interview. This is no big deal if you live in, say, Buenos Aires, but if you live in Ushuaia (four hours away by plane), it means additional expense and time for what is usually only a token conversation with consular staff. For an applicant with a family, this could mean more than US$500 in visa fees, not to mention the additional travel costs, for someone who wants to bring his wife and kids to Orlando (not my preference, but plenty of South Americans do so).

Some countries, notably Brazil and Chile, have responded to the State Department policy by raising their visa fees for US citizens. Chile, for instance, requires a US$100 "reciprocity fee" (which might be called a "retaliation fee") from every country that imposes visa fees on Chilean nationals (including also Mexico, Australia, and Canada).

This fee (which I expect will now rise) must be paid in US cash on arrival at Santiago's international airport--not the best way to greet a visitor who's just arrived on an all-night flight. I can't say it's unfair, but it often means a bad first impression of the country (even though the Chilean visa is valid for the life of the passport). The photograph above shows my reciprocity fee receipt from December 2000, when the fee was only US$45; it'll last me until late 2010.

My understanding, and I may be mistaken, is that Brazil refunds the fee to unsuccessful visa applicants. For a while, in response to US abuse of Brazilian citizens, Brazilian immigration was also fingerprinting US citizens on arrival (which led an outraged Rio de Janeiro mayor to greet US tourists with T-shirts and other gifts, as his city depends on the tourist trade).

Perhaps refunding the money for successful applicants would encourage legitimate tourists while discouraging stab-in-the-dark visa applicants. I'm presuming the State Department's measure has primarily to do with the cost of processing visas, many of which get rejected.
Posted by Wayne Bernhardson at 2:54 PM

Thanks for this information. It is conveniently NOT mentioned on the US department of state's website regarding Chile. The cost of my trip keeps going up. Urgh. Maybe I should wait until Obama takes office.

I have nothing good to say about the Bush regime, but this is not something likely to change with a new US administration. Canadians pay even more and, while I think bad policy by the Chileans, I can't say it's unfair.

That said, Chile does not collect the reciprocity fee for those who enter by land or any airport other than Santiago (with the possible exception of Easter Island).