In November of 1994, eclipse chasers from around the world converged on the Chilean precordillera village of Putre, near the Peruvian and Bolivian borders, to view one of the longest total solar eclipses on record - more than three minutes. In an arid, thinly populated area with few services, thousands of people camped along the international highway that links the Chilean port of Arica with the highlands of Bolivia, but 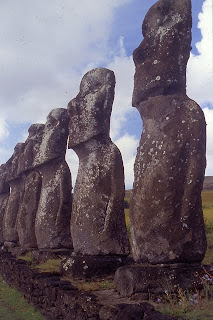 today there is little evidence that such a transitory event even happened.

Something similar could occur next year on Rapa Nui (Easter Island), as the longest eclipse of the 21st century - four minutes and 45 seconds - is due to take place on July 11th. All the island’s 1,500 hotel rooms - nearly all of them in the village of Hanga Roa - have been booked. During the period in and around the eclipse, the price of the five-hour flight from Santiago (LAN is the only airline that goes here) has nearly tripled.

In fact, the home of the legendary moai has long been a site for astronomical observations - the statues at Ahu Akivi (pictured here), near the Maunga Terevaka area where a music festival is to take place at the time, stare directly into the setting sun at the spring and autumn equinoxes. Still, there is concern about such an influx to a small island (only 171 sq km, with about 5,000 inhabitants) that is, in essence, one large archaeological site. Normally, over the course of 12 months, about 50,000 unique visitors arrive on the island, though many of them are concentrated in the summer months of January and February (when the ten-day Tapati Rapa Nui festival takes place.

It’s unfortunate, given the pubicity that eclipses get, that few foreigners appreciate that Chile is the Southern Hemisphere’s most 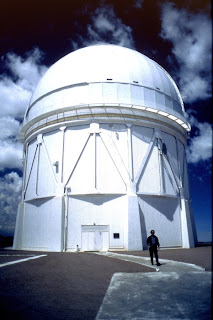 important single country for professional astronomers. The desert north, from La Serena to Antofagasta and even San Pedro de Atacama, is home to major international observatories such as Cerro Tololo (pictured here), La Silla, and Cerro Paranal; all of these are open to visiting tourists, though tours usually require advance planning and reservations. These are almost invariably daytime visits - the romantic stereotype of astronomers peering through their telescopes on all-nighters has been superseded by their viewing and interpreting data on their computer terminals, mostly during daylight hours.

There are also, however, small-scale municipal observatories, such as Mamalluca and Collowara, where nighttime visitors can peer at the southern skies through large, if not quite professional, telescopes. Space Observations is a commercial but engaging and highly professional operator with nighttime excursions on the outskirts of San Pedro de Atacama.
Posted by Wayne Bernhardson at 8:49 PM