In Buenos Aires, I live just a couple blocks from the Museo Evita, and only a 20-minute walk or so from her tomb at the Cementerio de la Recoleta, which I revisit regularly in the course of updating Moon Handbooks Buenos Aires and my other titles. The cemetery has always been an attraction (though not just for Evita) but the museum, which opened in 2002 on the 50th anniversary of her death, has become a significant destination as well.

Evita’s post-mortem odyssey, fictionalized in the late Tomas Eloy Martínez’s novel Santa Evita, is a surrealistic tale made even more 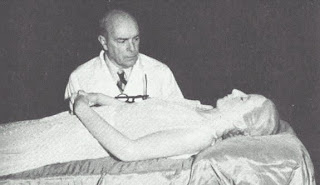 outrageous in that most of what Martínez wrote is fact: her elaborate embalming by the mysterious Spanish doctor Pedro Ara (pictured here, with Evita), her “residence” at the CGT labor union headquarters, her corpse-napping by the military (which included a stint with an infatuated officer), the surreptitious shipping to an anonymous grave in Italy, and a post-mortem prisoner exchange (for the assassinated General Pedro Aramburu) that left her at Juan Domingo Perón’s Madrid residence-in-exile. Finally, after Perón’s death in 1973, his widow Isabel (who had lived alongside the mummy in Madrid and succeeded him as president) brought Evita to Argentina, where she eventually ended up in the Duarte family crypt beneath her birth father.

It may be hard to imagine a more implausible story, but on a recent visit to Robert Wright’s exceptional Recoleta website, I encountered a brief blurb on 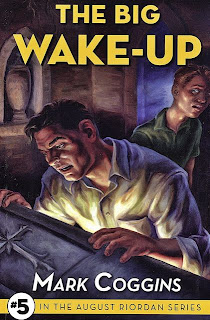 San Francisco author Mark Coggins’s The Big Wake-Up, an action-mystery novel based on the premise that the real Evita - there were in fact several replicas of her corpse - had ended up in Oakland’s historic Mountain View Cemetery, barely a ten-minute walk from my California home. Wherever I go, apparently, Evita’s never far away!

Having recently read the book, I don’t intend to give away too much of the story, but it involves Coggins’s wise-cracking private investigator August Riordan and two parties that want Evita’s body: an Argentine politician and his military allies, and an outlandish disciple of Dr. Ara’s who tries to embalm everybody she can in the process. With an obvious debt to the great Raymond Chandler, it’s fun bedside reading before or after a trip to Buenos Aires, or on the plane.
Posted by Wayne Bernhardson at 10:11 PM