Historically, South America is a Catholic continent, where Spain’s colonial legacy, in countries such as Argentina, helped make 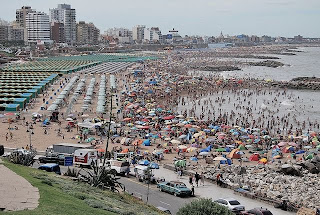 it the official religion. Pre-Columbian South America, of course, had its own belief systems - which haven’t all disappeared - but after independence the continent’s religious diversity increased dramatically. In Argentina, this meant an influx of Russian Orthodox Catholics, Protestants of various denominations, Jews, Muslims and others.

In fact, the Argentine state still provides economic support for the Church, even paying the salaries of bishops - though a 1994 constitutional reform eliminated the requirement that the president be a Roman Catholic. It also deleted a particularly anachronistic clause that required the state to “maintain a peaceful relationship with the Indians and promote their conversion to Catholicism,” but even these reforms overlook the fact that Argentina is a more secular country than in the past.

Despite the Catholic tradition and the growing presence of evangelical Christians, for instance, Semana Santa (Holy Week) is as much or more a four-day getaway as it is a strict religious observance. In my Palermo neighborhood, on Good Friday, there was little sign of any religious influence despite the presence of a large church less than a block away. Some businesses had closed early, though - I had to walk a couple extra blocks to get my morning paper, for instance, because my nearby newsstand was shut. Government offices, of course, were closed, given their liberal holiday benefits. 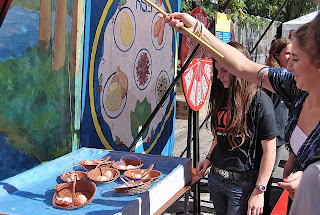 participated in the Via Crucis (Stations of the Cross) march from the Plaza del Congreso to the Catedral Metropolitana, at least twice that many spent the weekend sunning themselves in the Buenos Aires province beach resort of Mar del Plata (pictured above). Even last weekend’s Pesaj Urbano, the Passover fair that closed two blocks alongside Palermo’s Plaza Armenia, seemed far more secular than religious. With live klezmer music, games on themes such as rescuing Moses from the reeds (as pictured here), the annual Jewish festival (Argentina’s Jewish community of about 200,000 is the world’s sixth-largest) felt more like a cultural/commercial county fair in the United States.

That said, Argentina has not gone nearly as far as militantly secular Uruguay, where the four-day break is officially known Semana de Turismo (Tourism Week). Secularization there dates from the early 20th century, when the government forbade crucifixes in hospitals, prohibited the army’s institutional presence in religious ceremonies, eliminated the position of military chaplain, and decreed that the flag could not be lowered for religious symbols or individuals. Later, in 1919, the government of José Batlle y Ordóñez created Semana de Turismo (which is how Uruguayans normally refer to it) and changed December 8’s Día de la Vírgen (Immaculate Conception) to Dia de las Playas (Day at the Beach). At the same time, Christmas became the Fiesta de la Familia (Festival of the Family).
Posted by Wayne Bernhardson at 5:33 AM