I have a natural antipathy to “reality” TV shows which, as most everybody acknowledges, are no such thing – any group of people followed around by a camera crew is acting, whether or not they admit it. That said, I’ll plead guilty to never having watched one, and I don’t mind being castigated for ignorance. I nearly broke my pledge never to watch one this week, though, when The Amazing Race visited northwestern Argentina, one of my favorite parts of the country.

My friend and colleague Edward Hasbrouck – one of the best-traveled people I know, and we share a publisher – is an addict of The Amazing Race. He regularly reviews the show on his own blog, managing to provide serious travel information in the context of a program that might otherwise be considered frivolous. He sent me a link to the episode, which started in the northwestern wine region surrounding the town of Cafayate, and I even opened it, but was stymied by constant buffering on the YouTube page.

Nevertheless, today I received a copy of Edward’s regular newsletter with his critique of the episode, and I have a few comments on his comments, intended in the spirit of constructive criticism. Given his broad knowledge of the travel world, he knows far more than I do about most places, but there were a few items I could not let pass. 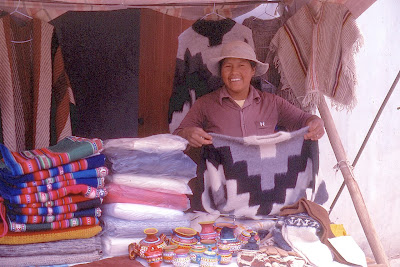 Argentina’s Andean Northwest is indeed the most indigenous region of the country and, as Edward notes, “All the people the racers met this week appeared to be of indigenous heritage” (such as the woman above, from the town of Humahuaca). He repeats, however, the oversimplification that “most Argentines are mainly or entirely of European ancestry, with the largest proportion descended from 19th and early 20th century immigrants.” It’s true, of course, that Argentina saw massive European immigration during that period, and it’s particularly noticeable in the cities, but a DNA study a few years ago – to which I don’t have the reference at hand - concluded that nearly half of all Argentines can trace their heritage back to the country’s pre-Columbian peoples. It doesn’t mean, of course, that the indigenous heritage is dominant everywhere, but it is significant.

I enjoyed Edward’s commentary on the outlying stockyards barrio of Mataderos, where the city meets the countryside in the Feria de Mataderos, a weekly street fair. I have to take exception, though, with Edwards statement that the barrio’s Nueva Chicago soccer gang can’t match the violence levels of Britain’s soccer hooligans. Argentina’s barras bravas are a plague on the sport, and often intimidate players on their own team and even management – which timidly gives them free tickets in hopes of maintaining “peace” with them. In fact, it’s not unusual for rival barras of the same team to attack each other, and deaths are not unusual – in a recent case, one barra shot at a bus carrying their rivals, and killed somebody on board. I wholeheartedly agree with Edward, though, that anybody attending a soccer match in Buenos Aires or elsewhere in the country should wear neutral colors – drab is good, drabber is better. 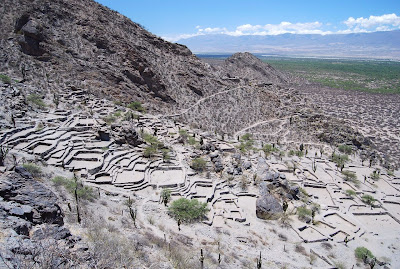 Finally, the grammatical pedant in me has to note that the word “Quilmes” – which describes the pre-Colombian fortress ruins near Cafayate (pictured above), the Buenos Aires suburb that takes its name from the indigenous people marched there by the Spaniards, and the beer that’s manufactured there today – does not have an accent. Likewise, the transport company Buquebus, which operates the ferries between Buenos Aires and Uruguay, has no accent.
Posted by Wayne Bernhardson at 4:12 PM