Long overshadowed by Buenos Aires, whose reputation for European elegance belies its essential modernity, Santiago de Chile is an underrated city that’s embraced that modernity at the same time that it’s managed to preserve enclaves of its history – despite the seismic uncertainty that’s never far below the surface. That’s especially relevant as the second anniversary of the massive 2010 earthquake approaches at the end of the month, though that quake impacted the Chilean capital less than it did the smaller cities and countryside to the south. 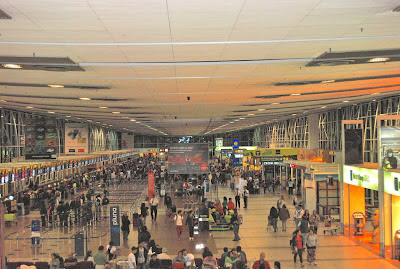 That became apparent as I landed in Santiago Wednesday morning, took the shuttle into town, and spent most of the next two days running a few errands and seeing some sights that I needed to revisit.  Over the past three decades-plus, I’ve been to Santiago dozens of times, watching its transition from the drab days of the dictatorship to an economically and culturally vibrant city. 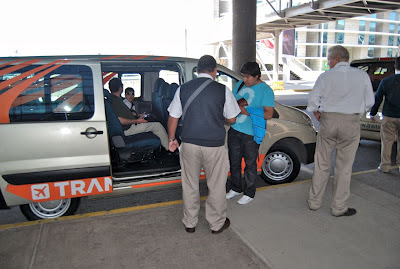 That’s not to say there aren’t problems: on the trip from the ultra-modern airport (pictured at top), one of the region’s best, first-time visitors can’t help but notice uninspiring concrete block houses and the graffiti that often cover them. In fact, Santiago’s graffiti problem appears to be getting worse rather than better, especially in older neighborhoods.

While I visit Santiago frequently, I recently realized that my photo library of the city needed to be updated, not having visited many key sites since I acquired my digital SLR about six years ago. One of those sites is Cerro Santa Lucía, the promontory where Pedro de Valdivia held out against the Mapuche in the 16th century, and Charles Darwin observed the “impressive and unique” view in 1834. It is now a lushly landscaped public park and, just below the summit, the “Jardín Darwin” commemorates his visit.
Twelve years before Darwin, Scottish immigrant Maria Graham had left a more eloquent description of the view: “From Santa Lucía we discovered the whole plane from Santiago to the Cuesta del Prado [in the coast range], the plain of Maypu [Maipú] stretching even to the horizon, the snowy Cordillera, and beneath our feet the city, its garden, churches, and its magnificent bridge all lit up by the rays of the setting sun…what pen or pencil can impart a thousandth part of the sublime beauty of sunset on the Andes?” 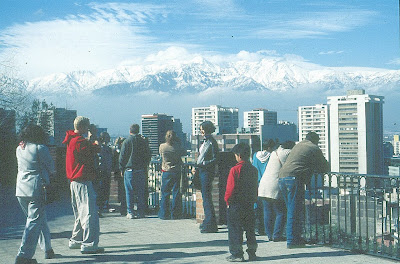 Many things have changed, obviously, since Valdivia, Darwin and Mrs. Graham ascended Santa Lucía’s summit. I have a badly scanned wintertime slide, taken a decade ago, that still shows the snow-capped Andes to the west above a relative paucity of high-rise buildings. On Thursday, though, a photograph I took from a slightly different perspective shows a proliferation of apartments and other high-rises stretching east toward the Andean foothills. At this time of year, of course, there’s no snow on the closest summits, but the sheer density of construction is impressive – even if they haven’t yet obstructed the views from Santa Lucía. 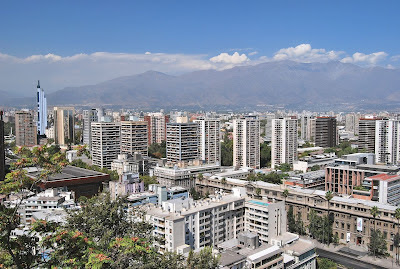 Later in the afternoon, I went to visit Brian Pearson of Santiago Adventures, a US citizen who set up a tour company here partly because of the city’s easy access to the Andes (Brian is a passionate skier, and the slopes of Valle Nevado and its neighboring resorts are less than an hour from downtown). He remarked that, after some cities in China, Santiago has seen the world’s biggest building boom over the past decade. I can’t recall the exact numbers, but that’s certainly plausible.
Posted by Wayne Bernhardson at 1:09 PM