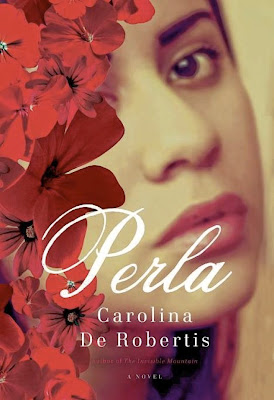 A couple weeks ago, I reviewed Roberto Ampuero’s The Neruda Case, about the final days of poet Pablo Neruda around the time of the 1973 coup against Chile’s constitutional president Salvador Allende Gossens. Translator Carolina de Robertis, a fellow Oaklander whom I have not yet met in person, provided me review copies of Ampuero’s book and her own novel Perla, which deals with the aftermath of Argentina’s 1976-83 “Dirty War” against “subversives” who were often brutally kidnapped and executed by coup-mongers such as General Jorge Rafael Videla. 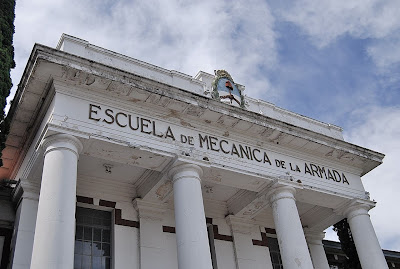 Videla made the news again this week, as a federal court in Buenos Aires sentenced him to 50 years in prison for plotting the theft of babies from political prisoners and their subsequent “adoption” by supporters of the coup. The events in question took place at the Escuela Mecánica de la Armada (pictured above), the naval engineering school that was one of the regime’s most notorious detention and torture sites. It is now a museum, open to the public, where visitors can see the cell where pregnant detainees gave birth to children most of them never saw again.

The exact date when the novel takes place is unclear, but the title character Perla, a young woman in suburban Buenos Aires, has a surprise guest – a sopping wet young man who can only nourish himself with water - while her Argentine family (a naval officer and his wife) are on vacation in Punta del Este (Uruguay). As happens, Perla’s parents (whom she is due to join across the River Plate) were directly involved in the trafficking of Dirty War babies.  In the tradition of magical realism, as the ghostly figure’s presence becomes more tangible – it’s also worth noting the naval “death flight” pilot Adolfo Scilingo is a family friend – Perla has to confront truths she’d rather avoid. Just as Argentina has had to confront figures like Videla, who is already serving a lengthy prison sentence for other Dirty War crimes.

Argentina has dealt with this theme cinematically, in the Oscar-winning film The Official Story (1985), and in many non-fiction books, but Perla appears to be the first to grapple with it in fiction. One of the book’s protagonists is Perla’s crusading journalist boyfriend, to whom she eventually returns when the issue of her origins becomes too difficult to face alone. In the end, De Robertis, who hails from Uruguay via Europe, has written an absorbing novel, in elegant language, that leaves an enduring impression on the reader.
Posted by Wayne Bernhardson at 10:00 AM