When "No" Is A Positive

In 1988, when Chilean general Augusto Pinochet Ugarte decided to try to dignify his dictatorship with the title of president through a yes-or-no plebiscite, I was not the only one to think he might actually win. Though I was not in Chile at the time, I had first visited the country in 1979, six years after the violent coup that ousted constitutional president Salvador Allende Gossens; having gotten to know a pretty broad cross-section of Chileans, I wondered whether an apparently weak opposition could convince the electorate to dump the dictator. 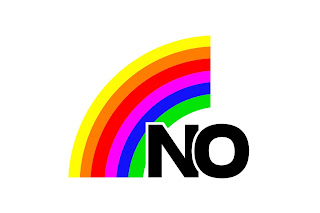 Many Chileans recalled the three years of Allende’s Unidad Popular government as a time of disorder and shortages, and genuinely worried about its return. Even many UP partisans wondered whether they could defeat the dictator, and not only because they thought the results might be rigged. This past Saturday night, in San Francisco, I finally got to see director director Pablo Larraín’s Oscar-nominated No, which attempts to explain how the opposition campaign won the day.

From my first days in Santiago, I recall an earnest young man, friend of a friend, whose goal was to become the top salesman of a new soft drink. Ironically enough, in an early scene in the movie, Gael García Bernal’s fictional adman René Saavedra unveils a promotional TV spot for a soft drink called “Free.” After that, he becomes a reluctant recruit for a difficult task: to give the “No” campaign against Pinochet – allowed just 15 minutes of airtime nightly – a positive spin.

Using a great deal of period footage, often filming with vintage equipment, Larraín shows the challenges of confronting an authoritarian government, with virtually unlimited resources and the ability to intimidate its adversaries. Nevertheless, Saavedra succeeds even as he alienates some of his own potential allies. Astonishingly, the “No” campaign was overwhelmingly good-humored.

According to The New York Times’ Larry Rohter, No has drawn some criticism for emphasizing a TV public relations campaign to the exclusion of behind-the-scenes activities by political parties that, having been banned for a decade and a half, managed to register and motivate their supporters, and get them to the ballot box. On the face of it, that’s a fair criticism, but that’s not the story (or the aspect of the larger story) that Larraín chose to tell.

My criticisms of No are a little different. Politically speaking, Chile is a very centralized country, and the film is very Santiago-centric – personally, I would have liked to see something about how the campaign played elsewhere in the country. As it is, the only glimpse we get outside the capital is archival footage of a beaming Pinochet being serenaded by schoolchildren on a visit to Rapa Nui (Easter Island), in what was clearly a propaganda stunt.

On balance, the verdict for No is “Yes” - it’s a movie well worth seeing, but it also begs the question of what Larraín will do next. Three of his four feature-length films comprise a de facto trilogy that chronicles the trauma of the 1973 coup (Post-Mortem), life under the dictatorship (Tony Manero), and escape from that past (No). It’s worth adding that Tony Manero was the first of the three, though chronologically speaking Post-Mortem should go first.

There is little direct continuity among the films, with no shared characters. Chilean actor Alfredo Castro plays wildly different roles in all three: an apathetic loner in Post-Mortem, a homicidal Travolta wannabe in Tony Manero, and René Saavedra’s politically timid studio boss in No. Whatever Larraín’s next project, the odds are that Castro will literally play a role.
Posted by Wayne Bernhardson at 8:16 AM