When I lived in the Falkland Islands, during 1986-7, nobody would have expected to find haute cuisine in the capital of Stanley - in fact, the diet was so one-dimensional that, with only slight exaggeration, many Islanders would refer to their staple diet of mutton as “364” because it was on the household menu virtually every day. In an economy that depended primarily on wool, the meat itself wasn’t always top quality but on Christmas at least, so went the saying, “we eat lamb.”

At that time, Stanley even lacked a bakery - homemade bread was the rule - and there were only a handful of places to eat such as the Woodbine Café (for takeaway fish-and-chips plus the occasional pizza), the landmark Upland Goose Hotel (whose food was never anything special, and which the Falkland Islands Company recently turned into condos), and the Malvina House Hotel (significantly better, but hardly up to international standards). Still, there was never much reason to eat anywhere other than at home.

This began to change around the time I left, after the British government declared a fisheries protection zone that licensed a growing fleet of foreign trawlers and squid jiggers that had long operated without regulation. With the declaration of the zone, which required foreign vessels to have local partners, a lot of cash came into the economy and tastes began to change. It wasn’t an overnight process, but the presence of British contract personnel, the military, and an increasingly affluent local population - often well-travelled - created a market for more sophisticated food. 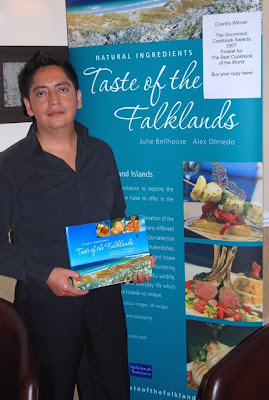 The single most important figure in this change was Chilean chef Alex Olmedo, who left the kitchen of the Malvina House Hotel to found the Falklands Brasserie on the site of the late, lamented Globe Store (which angry Argentine conscripts burned to the ground in the final days of the 1982 war). At the Brasserie - the Falklands’ first stand-alone restaurant of any significance - Olmedo had a freedom he may have lacked at the Malvina, and he turned local ingredients into dishes that were unprecedented (here, at least) such as lamb kebabs. In addition, he brought in a diversity of Chilean wines to accompany the food and even wrote a cookbook, A Taste of the Falklands, to promote the possibilities of South Atlantic food. 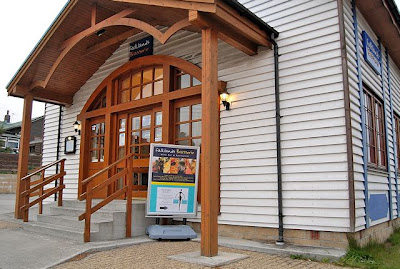 Sadly, though, Olmedo appears to have become a victim of his own success. Recently, the kitchen at Malvina has upgraded its menu with a new chef from the United Kingdom and, when Penguin News editor John Fowler and I tried to lunch there on Friday, it was so packed we couldn’t get in. Instead, we went to the nearly empty Brasserie for a perfectly decent lamb casserole.

Apparently, the Brasserie will close at year’s end and, while there are rumors that Olmedo has something else planned, he has had to lay off staff. Unfortunately, I didn’t have a chance to talk with him, as he was arriving on Saturday’s plane from Punta Arenas - at the same time I was in the departure lounge waiting to leave for Chile. 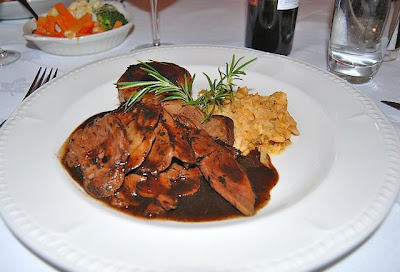 That same Friday night, I treated my hosts Ray and Nancy Poole to dinner at the Malvina - we got a table only because of a late cancellation - and the food was superb, beginning with starters such as Upland Goose paté. The main courses included slow-cooked pork belly and, in my case, roast leg of lamb with rosemary (pictured above) and a side of creamed cabbage - all items produced locally. 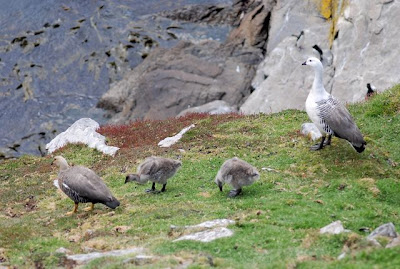 Ironically enough, farmers here have long considered the wild Upland Goose as vermin that grazed lush green pasture better left to sheep - in fact, there used to be a bounty on goose beaks and farm employees would often spend slow winter days shooting them. In the spring, they collected goose eggs (for household consumption at a time when domestic poultry were few) and snagged goslings for their drumsticks, considered a delicacy. The evidence that geese did indeed thrive at the expense of sheep is anecdotal at best, but there’s a lingering prejudice against them in the camp (as all the rural areas outside Stanley are known). From my own observations, supported by many others, it seems unlikely that the purges have reduced geese numbers in the least. 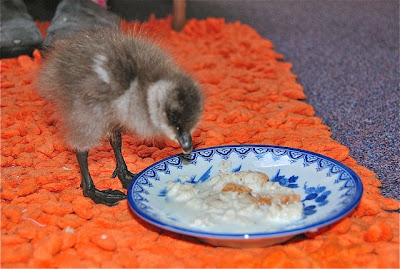 Given that history, and our own Friday night dinner, it’s ironic that on the day before I returned to Stanley from a trip to Carcass Island, Port Stephens and Bleaker Island, somebody brought Nancy an orphaned gosling found wandering on a road just outside town. Having once nursed another gosling to maturity, she’s doing it again despite the curiosity of her four cats in their new housemate (when he’s a bit older, he’ll easily intimidate the cats). The diet of milk and soggy bread may not be the lush pasture Upland Geese prefer, but the bird seems to have recovered his strength and, despite the likely disapproval of farmers, in a few months he may rejoin the flocks that continue to graze the greens.
Posted by Wayne Bernhardson at 10:34 AM