Annually, National Geographic Traveler magazine (for whom I write occasionally) produces an annual survey of “destinations rated” and, in the new November-December issue, this year’s list evaluates the “world’s great islands, beaches and coastlines.” In a print magazine, of course, there’s not room for much more than a list of all 99 places - Newfoundland’s Avalon Peninsula comes in first - but the online version goes into more detail. 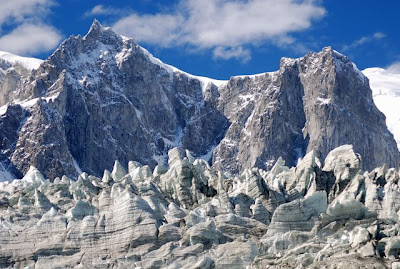 I was pleased to read that two Southern Cone destinations - the Chilean fjords (No. 4, pictured above) and Argentina’s Península Valdés (No. 10) made the top ten of places “In excellent shape, relatively unspoiled, and likely to remain so.” Chile’s Viña del Mar (No. 56) made the mid-list as “a mixed bag of successes and worries, with the future at risk.”

In fact, there are two sets of Chilean fjords. One lies along the west coast, where Navimag passenger ferries between Puerto Montt and Puerto Natales make occasional incursions from the inland sea of the Aisén and Magallanes regions to the edge of the Southern Patagonian Icefield, and the Skorpios cruise line visits Parque Nacional Laguna San Rafael and offers a longer tour of the continental glaciers.

In this case, though the article doesn’t make it clear from the beginning, the fjords in question are those on the south side of the Isla Grande de Tierra del Fuego, visited only by the relatively small vessels of the Cruceros Australis line. Traditionally, their Mare Australis and Via Australis vessels (carrying about 120 passengers each) shuttle between the Chilean city of Punta Arenas and the Argentine port of Ushuaia; this season, they will be adding the Stella Australis, capable of carrying about 200 passengers with greater amenities, to the fleet.

This, of course, contrasts with huge cruise ships that carry thousands of passengers and are, fortunately, incapable of navigating the narrow glacial channels in question here. According to one of Traveler’s anonymous panelists, “Local officials are aware of the damage cruise-ship operators have done elsewhere and working to create a sustainable tourism strategy.” Cruceros, for its part, has created an elaborate statement of its own environmental goals. 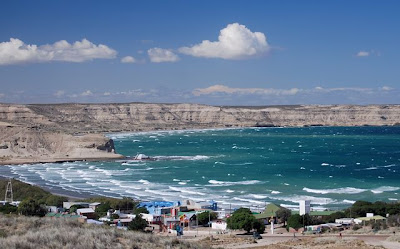 Meanwhile, on the Atlantic coast of Chubut province, Argentina’s Península Valdés draws praise for facilities “that are set up in a way to minimize their impact on the local environment.” The anonymous commentators, though, differ in their assessments: One dissents that “Development is relatively unregulated” and, from personal experience, I would say that the growth of the gateway town of Puerto Pirámides (pictured above) is cause for some concern.

Península Valdés, like most of Argentina’s Atlantic coast, is a desert, with no surface streams and an annual rainfall of only 246 mm (less than ten inches). Over two decades and at least half a dozen visits to the reserve, I have seen Puerto Pirámides expand from a oversized fish camp to a substantial village, with many more hotels and restaurants, that depends on groundwater for its existence. Some of those hotels, such as the Hostería Ecológica del Nómade, are designed to limit their environmental impact, but the town’s growth is nevertheless a serious concern. 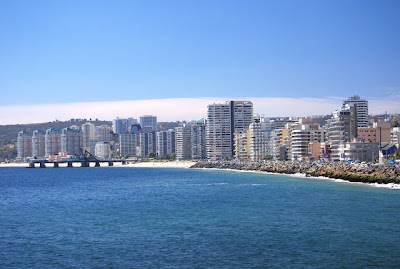 That happened a long time ago in Viña del Mar (pictured above), Chile’s traditional seaside resort, whose proximity to the capital city of Santiago ensures an invasion of tourists not just in summer but year-round on weekends. According to Traveler, “overbuilding has damaged the ecology of its beaches, and peak season crowds and traffic are poorly handled.” For my part, I prefer the neighboring city of Valparaíso, with its quirky geography and colorful hills neighborhoods.

One other coastal destination caught my attention in this month’s Traveler, but it’s not part of the ratings game. A photo gallery on animal migrations includes a nesting colony of black-browed albatrosses - to my mind, one of the world’s most beautiful birds - in the Falkland Islands. I’ve been to several albatross colonies there, most notably on Saunders Island (pictured above), but I don’t recognize the one in the Traveler photograph; from the topography, my guess is that it’s remote, hard-to-reach Steeple Jason Island.
Posted by Wayne Bernhardson at 7:18 AM