Normally, when updating my guidebooks to Argentina, Buenos Aires, Chile and Patagonia, I first fly from Los Angeles with LAN Airlines to Santiago, which is my mobile base in South America - the place where my car is parked, at a friend’s house on the outskirts. Earlier this year, though, LAN started three flights weekly from San Francisco, across the Bay from my Oakland home, to the Peruvian capital of Lima - with easy connections south to Santiago, and that was the flight I took yesterday. 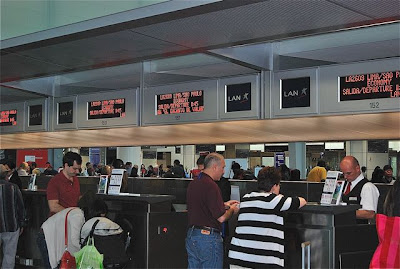 At SFO, LAN’s check-in (pictured above) was crowded and a bit slow, but airport security was quicker than I expected - a long line to get into the secure area but, once we did, it went fast. Thanks to a business-class waiver, I managed to talk my way into the first-class security line and got through much quicker.

It was only at the last minute, though, that the gate staff confirmed my seat in business class, which was packed - not an empty seat that I could see. With a midday departure, the lunch was exquisite by airline standards - a shrimp and scallop ceviche, a cheese sample, a savory green salad and a grilled steak (a little overdone by my standards, but onboard food does have its limits) What really stood out was the wine list, which included an outstanding Sauvignon Blanc from Chile’s Matetic, a Malbec from Argentina’s Salentein, and a Syrah from Chile’s Concha y Toro.

Formally, the flight from SFO continues to São Paulo (Brazil), but even through passengers had to disembark in Lima - and, for my part, I had to change planes for Santiago-bound flight from LAX. The main problem with this flight is arriving at 6:30 Chilean time, which is 1:30 a.m. California time, which can make for a rough first day.

I left California’s warm weather - we’re having a late Indian summer - for equally warm spring temperatures in Santiago. Fortunately, because Santiago sits about 600 meters above sea level, it cools off at night, and my early morning arrival was pleasant enough except for the awkward hour.

The Albanian Connection
What do the United States, Canada, Australia, Mexico and Albania have in common? Well, with a new passport in hand for the first time in a decade, I had to pay Chile’s so-called “reciprocity fee” levied against citizens of countries that collect a similar visa fee from Chilean citizens. When I last paid the fee, in the year 2000, it was US$40 for American citizens, but that’s risen to US$140; Canadians pay US$132, Australians US$61, and Mexicans and Albanians US$30 - though, as far as I could tell, there were no Albanians in the queue.

I’ve written several posts about the futility of reciprocity fees, so I won’t repeat them all here but will add that this was the longest line I’ve ever seen at Santiago’s Aeropuerto Arturo Merino Benítez (SCL is looking surprisingly good, by the way, in the aftermath of the massive February earthquake). All I’ll say is that we can only hope that the United States accelerates its proposal to extend the visa waiver program to Argentina, Brazil and Chile, to everybody’s benefit.

Taxis for Nightowls
In other news, last week the city legislature of Buenos Aires approved yet another taxi fare increase, on top of a 26 percent boost that took effect only last month. This time, though, it’s more selective, as it will affect those who dine out at what are normal hours in Buenos Aires - after 10 p.m. -and partake of the city’s hyperactive nightlife, as a 20 percent fare increase will apply only until 6 a.m.

By global standards, Buenos Aires taxis remain cheap but, given the phenomenal increase since 2002, it’s not hard to imagine where they’re going.
Posted by Wayne Bernhardson at 12:27 PM