Today’s entry will be a summary of events regarding Argentina and Chile, some of them more notable than others.

Chaos at Ezeiza
Over the weekend, things didn’t go well at Buenos Aires’s Aeropuerto Internacional Ministro Pistarini (Ezeiza), which failed to accommodate the transfer of flights from the domestic airport Aeroparque - a topic on which I wrote two weeks ago. Partly because of a labor dispute, 22 of 62 domestic flights were canceled, and many passengers planning to fly to the city of Córdoba - barely an hour from Buenos Aires by air - had to take a nine-hour bus trip instead; bus companies at the Retiro terminal (pictured below) had to double their frequencies. 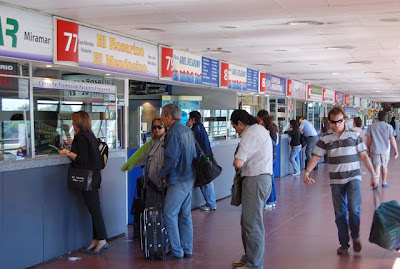 According to recent reports, things are gradually returning to normal, but overseas arrivals should be prepared for delays and complications. Even when Aeroparque reopens, that won’t necessarily end the frequent disruptions in Argentine air services.

Presidents Fail to Reach Antarctica
Meanwhile, despite elaborate plans, Chilean president Sebastián Piñera and his Ecuadorean counterpart Rafael Correa were unable to make their joint visit to Antarctica as the weather intervened - their Hercules C-130 was unable to land at King George Island (pictured below) in the South Shetlands because of dicey weather and had to return to Punta Arenas. Correa, for his part, pledged to return with Piñera at another time. 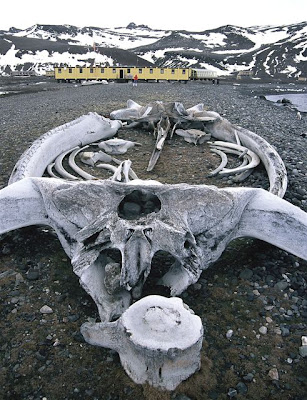 Piñera and Correa are not the first to experience such disappointment, nor will they be the last. When I flew to King George with Aerovías DAP in 2005, it was two days before the weather calmed enough to permit a landing so that we could transfer to the Antarctica XXI cruise; fortunately, on one of those days, Antarctica XXI was good enough to fly us to Puerto Williams, on Isla Navarino, and then put us up in the new Hotel Lakutaia.

Still, anyone booking the fly/cruise tandem to Antarctica should be aware that it’s subject to weather delays - with side winds, King George’s narrow airstrip can be unusable. That said, when we finally landed and then boarded the ship waiting offshore, Antarctica XXI managed to get us to every place promised - even if it meant steaming faster and that some stops were shorter than we might have preferred. Early December’s long summer days, of course, made it easier to get everything in.

An Argentine Banknote Shortage?
For some time, Argentina has experienced a shortage of coins - a great inconvenience for those riding public transport and making small purchases - but now, apparently, there’s also a shortage of banknotes. According to the Buenos Aires Herald, as the peso declined from par with the dollar to the current four-to-one ratio over the past decade, banknote values have not changed and the mint can simply not produce enough of them because of antiquated technology.

Buenos Aires mayor Mauricio Macri has demanded the federal government create a 200-peso note (the largest at present in 100 pesos), but the Herald says that doing so would be to admit inflation - which the administration denies is a serious problem. In the Herald’s words, “the government has resorted to an alternative strategy whereby it will order the shortfall in banknotes from the Brazilian Mint, hoping that this, plus recent measures implemented to encourage the use of electronic banking, will enable it to sell the illusion that there is no inflation in Argentina.”

The Miner’s Marathon/Telethon
On the lighter side, rescued Chilean miner Edison Peña appeared Friday November 5th on the David Letterman show, where his ostensibly spontaneous performance of the Elvis Presley hit "Suspicion Minds" was a huge hit with the studio audience. It couldn’t have been as spontaneous as it looked - surely the house band rehearsed it with him - but Peña is nevertheless a natural. One of those rare persons who manages to communicate without knowing another language, he even overcame an inadequate interpreter who kept putting words in his mouth.
Having kept in shape during 69 days in the San Esteban mine near Copiapó by running through the shafts, Peña topped off his weekend by entering and finishing the New York Marathon, even if he had to walk a fair portion of it. Limping across the finish line, then icing sore knees, he probably put his health at risk - but that’s what miners often do. Peña stands out because, unlike a large majority of working-class Chileans who might feel uncomfortable with the spotlight on them, he is remarkably extroverted and gregarious.
Posted by Wayne Bernhardson at 7:22 PM