More than 30 years ago, the first time I ever went to Buenos Aires, I flew from Santiago with the now defunct Braniff. That was barely a year before the company closed in 1982 but, at one time, Braniff was a prestige airline that pioneered many South American routes and even called itself the “Conquistador del Cielo” (Conqueror of the Skies).
Memories of my own first visit resurfaced when I stumbled upon Braniff’s video of “Beautiful Buenos Aires,” dating from the 1950s. Given the orderly optimism that pervades it, I’m guessing it’s the early 1950s, certainly prior to the so-called “Revolución Libertadora” that overthrew president Juan Domingo Perón in September of 1955. 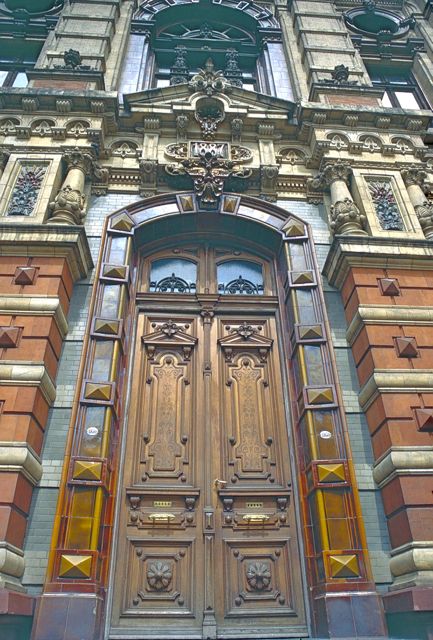 In the eight-minute film, streetcars still operate downtown, private automobiles occupy parking spots directly in front of the Casa Rosada presidential palace, and architectural landmarks such as the Obelisco, the Bank of Boston, the Edificio Kavanagh, the Plaza Hotel and the US Embassy (now the ambassador’s residence) are conspicuous. Astonishingly, though, the narrator (presumably reading a scriptwriter’s words) misidentifies the Palacio de las Aguas Corrientes (the waterworks popularly known as “Obras Sanitarias”) as the Correo Central, the central post office that's now being recycled as a cultural center. As my photographs above and below show, the two don’t look much alike. 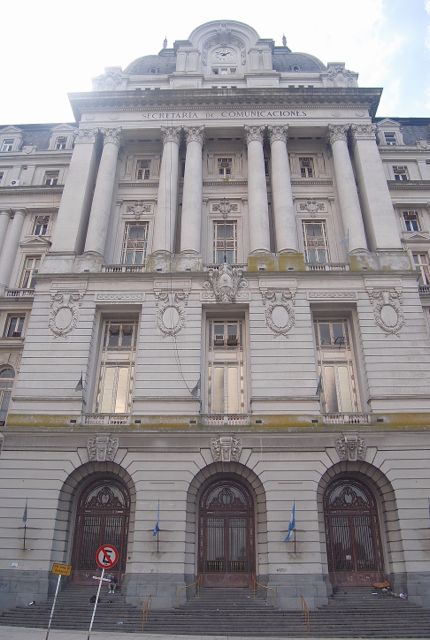 Braniff tried, though, to attract its clients with promises of premium shopping on Florida street – like “the featured street in a block party” with “practically everything the civilized world has for sale” after its closure to automobile traffic at 3 p.m. every afternoon. Today, of course, Florida and several other downtown streets are permanent pedestrian malls, but it’s no longer the elite shopping paradise it once was – partly but not exclusively because of Argentina’s current import restrictions.

To escape the crowded central city, of course, Buenos Aires had the open spaces of Palermo and the world’s largest man-made swimming pool for 100,000 bathers (something I had never heard of, though La Salada and Ezeiza are possible candidates).

One segment that shocked me, though, was that Buenos Aires was said to be the world’s only large city without traffic lights, “as pedestrians considered that to be violation of their civil rights and “heaven help the driver of a vehicle who claims right of way over them…” Instead, police on elevated pedestals directed traffic.

Once, about 20 years ago in the northern city of San Miguel de Tucumán, I had to talk my way out of a ticket for unintentionally disobeying one of those elevated traffic cops, who were an anachronism even then. Today, anybody who accepted at face value Braniff’s assertion that Buenos Aires drivers would respect pedestrians would, like Braniff itself, probably not survive to catch the flight home.
Posted by Wayne Bernhardson at 3:48 PM

Thanks. Very interesting. What happened to the San Martin replica house? Torn down? Strange there was no mention of the Teatro Colon. The Colon opera was well respected in the 50s. A pity to see how the city has declined - and it is so much less Argentine nowadays.

The San Martín replica house is still there, but it's really not much to see; it's the hero-worship headquarters of the Instituto Nacional Sanmartiniano (http://www.sanmartiniano.gov.ar/). True, the Colón was notable then, but somehow the clip omitted it. In some ways Buenos Aires may have declined, but remember that this was a promotional film never intended to show the city's seamier side.

Hmm, I'm not sure the city has declined but then I wasn't around in the 50's. I've only been coming here for 17 years (living here for the last 4) and as far as I can see the city, in terms of entertainment and culture, is getting better every year. It is truly the city where you can never get bored and as so much of the good stuff is government sponsored and transport is heavily subsidised, enjoying it doesn't depend on the size of your wallet! The same cannot be said of London for instance!!

Wayne, I am going to attempt to steal the Braniff video for my blog. I presume there is no copyright for it, though I will credit your blog for the theft. What struck me was not how much BA has changed but how little. The flip side of the difficulties of doing business here, the corruption, bureaucracy and uncertainty, is that it hasn't been overrun by investment bankers and Russian oligarchs, driving up prices and changing the culture . Why do you still have so many small greengrocers, butchers, ironmongers etc. Because if you are a big chain, people ask for big bribes, which inhibits your growth. Hooray! I don't have to go to a supermarket here because I have a massive choice of suppliers within a few blocks.

p.s. What ever you think of his politics, Macri is doing a good job enhancing the infrastructure, and the Ministry of Culture rocks!

p.p.s. If you are interested in the architecture of the early 40's art deco period, you should come and have a drink with me at the little Bed and Breakfast that I have just spent the last year restoring. It's kind of a "petit hotel", built on top of 4 floors of offices by the buildings original owner as his residence. Very unusual.