Uruguay by the Bay? Tasting Tannat in San Francisco

Several years ago, after first discovering Uruguayan wines in a San Francisco event, I visited the Montevideo wine district as I incorporated coastal Uruguay into the excursions chapter of Moon Handbooks Buenos Aires. I also incorporated my experience into an article that appeared in the San Francisco Chronicle travel section, and have revisited the area several times, getting to know many of the local wineries and their owners. Not until Thursday, though, had they come to visit me – in a manner of speaking, at least. 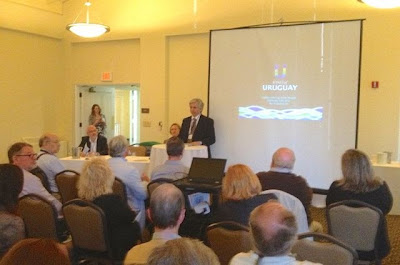 That is, for the first time in recent memory. After stops in Washington DC and Austin, Wines of Uruguay finished up a US trade and press tour in the Presidio of San Francisco with an introductory seminar and an extended tasting session with 15 different Uruguayan wineries, mostly from Montevideo with a couple outliers from Carmelo and the vicinity of Punta del Este. 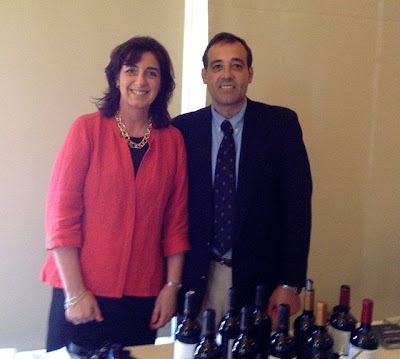 Of the 15, I had visited nine of them and, despite the elapsed time, most of their representatives recognized me immediately – Uruguay’s wine industry is a family affair, and all the tours I have taken were led by family members. I have stayed in regular contact with winery owners like Carlos and Ana Pizzorno (pictured above) and Eduardo Pisano (below), who greeted me almost like a relative. 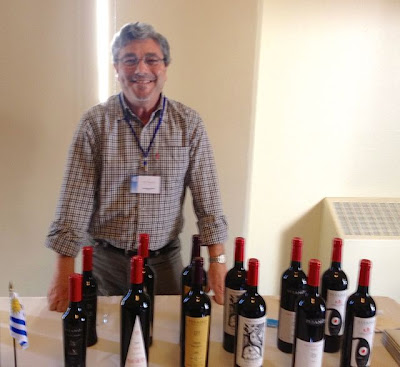 The brief seminar featured Uruguayan vintner Francisco Carrau, who has sequenced the Tannat genome, sommelier Gilles de Chambure, and consultant David Furer, all of whom helped put Uruguayan wines – most notably Tannat - in context. For an audience whose experience of the country was limited, there were general accounts of the country’s Bordeaux-ish climate and terroir, its soil diversity, the history of Tannat’s 19th-century importation from the French Pyrenees, and its appeal to high-profile winemakers such as Paul Hobbs and Michel Rolland.

The presenters compared the Uruguayans with Oregon vineyards in terms of their hands-on production, rather than industrial scale (if I recall correctly, Chile’s Concha y Toro conglomerate produces more wine than all of Uruguay). Uruguayan wineries are family-owned, but innovative, offering some creative blends with Tempranillo and Pinot Noir, for example, and uncommon whites such as Albariño (most common in Spain’s Rías Baixas). They are upgrading their expertise at leading-edge institutions like the University of California at Davis.

There followed several hours of tasting and conversation, as some of the wineries sought local distributors, but the consensus was that this was the most successful stop on the tour. I am far from having the enological expertise of the wine professionals here, but I found several I would be pleased to repeat and, at very competitive prices, they’re worth taking a chance on. In defense of my own shortcomings, I can only repeat a story I heard some years ago when a musician criticized a reviewer who, he said, knew nothing about playing the guitar. In response, the reviewer said tartly, “You mean I gotta play guitar to know how to buy records?”

The Uruguayans may have a lower profile than their Argentine and Chilean neighbors, but they have a great deal to be proud of. I should be returning to the theme of Uruguayan wines, with more detail, in the near future.
Posted by Wayne Bernhardson at 6:54 PM

Used to serve the Pisano tannat to my friends in BA. They loved it, of course, but were always taken aback when I would later bring the bottle to the table.

Uruguayan wine still has a low international profile, but the wineries do a lot with a little.