Over the weekend, I received an unexpected email from my nephew Juan Massolo, whose first public exhibition of photographs will go on display tonight (Tuesday, September 3) in the Buenos Aires barrio of Palermo. I have no first-hand knowledge about the T-Bone Bar & Grill where the exhibition will take place, but the menu looks rather more diverse than the name would suggest, as it also offers tapas, sandwiches, fish and seafood, and a diversity of pastas. Oddly, while wine glasses feature prominently in their own photographs, the website does not include a wine list. 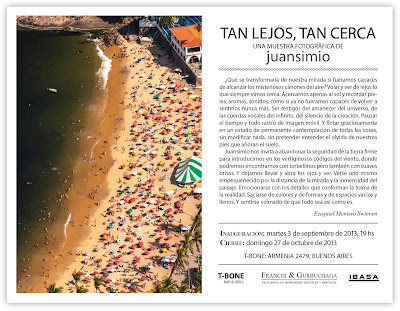 In any event, Juan’s work will adorn their walls until Sunday, October 27 so, if you’re in the Argentine capital, please drop by for a look. So far as I know, no consumption is required.

From the Theater to the Screen? “We Came from Far Away”
One of my favorite Buenos Aires experiences is the Teatro Catalinas Sur, a community theater group in the barrio of La Boca, which has a repertory of works that it sometimes repeats (and updates). One of those is Venimos de Muy Lejos (“We Came from Far Away”), a musical theater take on the Argentine immigrant experience that’s also filled with politically inspired satire (or, alternatively, satirically inspired politics). Still, it manages to avoid overdoing the polemics and topicality to focus on more enduring themes. 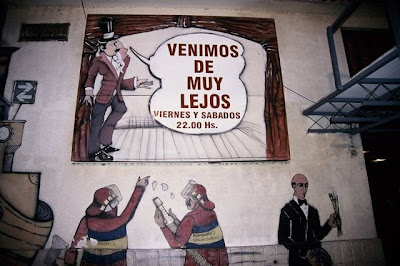 Now, apparently, Venimos de Muy Lejos is making the transition to the big screen under the direction of Ricky Piterbarg, about whom I know next to nothing – until now, Catalinas Sur has operated under the professional direction of Adhemar Bianchi, even though the performers themselves are (skilled) amateurs who even collect tickets and usher spectators to their seats. At their own theater, though, Catalinas Sur provides a libretto that lets even monolingual visitors under what’s going on (though they provide plenty of visual cues as well).
If Venimos de Muy Lejos makes it to English-speaking cinema audiences, the libretto obviously won’t work, and rendering the subtitles understandable from lunfardo (Buenos Aires street slang) will be challenge. Again, though, the cast’s sheer joy and skill in performing should cover any possible shortcomings. Several trailers have been posted to YouYube but, unfortunately, when I try to open them I get an error message. I’ll keep trying, though, and suggest that you do so as well.
Posted by Wayne Bernhardson at 1:24 PM