My friend and colleague Chris Baker, author of several guidebooks for 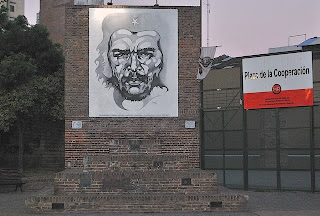 Moon and other publishers, has recently noted that Argentina, Bolivia and Cuba have recently collaborated to create a route called "Los Caminos del Che," to follow the travels of the legendary Argentine born revolutionary Ernesto Guevara. While my first-hand knowledge of Cuba is nil and I’ve spent only a limited time in Bolivia (and none in the area where Che met his fate), I’ve written about his Argentine youth in the course of my own travels in the country, and have visited several Argentine sites recently.

Argentina’s portion of the Guevara saga, created under the auspices of the Secretaría de Turismo de la Nación, includes destinations including his birthplace city of Rosario, the northeastern Misiones province town of Colonia Caraguatay, the city of Córdoba (capital of its namesake province) and the nearby town of Alta Gracia, and the Patagonian resort town of San Martín de los Andes.

Guevara always was always more than a little mysterious, and the mystery started with his origins. According to biographer Jon Lee Anderson, Che’s registered birthdate of June 14, 1928, was a deception, as he had been born a month earlier - his mother, Celia de la Serna, was pregnant at the time of her marriage and Che’s father Ernesto Guevara Lynch moved them immediately to remote Misiones, where the pregnancy could be kept secret.

In reality, Che’s presence in Rosario was fleeting - the Guevaras returned to Caraguatay after a brief visit to family in Buenos Aires - but that doesn’t mean it’s gone unnoted. His Rosario residence, a handsome apartment building at Entre Ríos 480, has long been a minor pilgrimage site, and the Plaza de la Cooperación (pictured above), two blocks northwest, features a scowling portrait on a brick wall. Most recently, in 2008, Argentine and Cuban architects collaborated to create the Plaza Ernesto Che Guevara (pictured here), a drab open space with an equally undistinguished statue.

In fact, rather than Rosario, Che-chasers would be better advised to go to Córdoba, where young Ernesto went to school, and 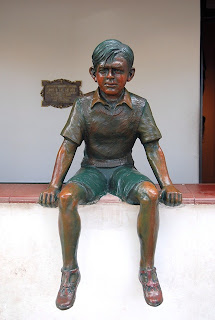 Alta Gracia, where his parents moved for the dry, mild climate that would be easier on his chronic asthma. Normally he made the 35-km commute by local bus but, for a time, he boarded in an annex of the Colegio Deán Funes (which no longer occupies its original downtown site). That annex is now the Azur Real Hotel Boutique, the city’s first hotel of its type, and probably the only Argentine hotel that can say “Che Guevara slept here” - on his travels in Patagonia and elsewhere, Che normally crashed wherever he could without paying.

Visitors will learn more about Che by going to Alta Gracia, a charming colonial town that’s home to the 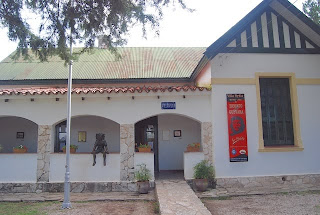 Museo Ernesto Che Guevara, which occupies one of several houses that the Guevara family rented in town. Then known as Villa Nydia, it’s the least polemical of any Guevara memorial. In fact, it does such a good job of reconstructing Che’s boyhood - through a photographic history of Ernesto and his family, his school report cards, and memories by his classmates, cook Rosario González (whom I met briefly several years ago), and others - that it doesn’t really place it in any greater context. This may not be the place for a full biography but, from its contents, one would hardly know that Che was a controversial figure, nor have any idea why Villa Nydia was converted into a museum, nor why so many neighbors opposed the conversion - nor even why Fidel Castro and Venezuela’s leftist president Hugo Chávez visited in 2006. 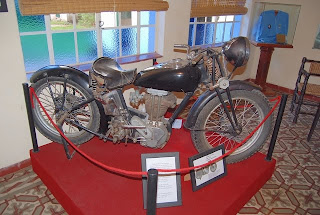 around South America. Part of that history is covered in San Martín’s Museo La Pastera Che Guevara, which I covered in detail in another post a little over a year ago. Anyone who wants to follow Che’s South American travels, though, would be better off picking up Patrick Symmes’s Chasing Che, which tells of the author’s adventures in search of the Guevara legend in 1996 (when I met him on Chile’s Carretera Austral).
Posted by Wayne Bernhardson at 5:39 PM