I'm Dreaming of a White...Bicentennial

Today is the 200th anniversary of Argentina’s Revolución de Mayo, which started the country’s independence movement, and bicentennial celebrations are underway in Buenos Aires 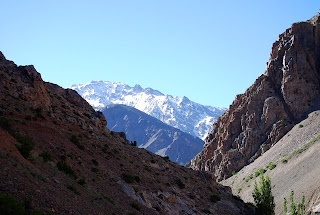 and throughout the country. Half a dozen mountaineers from the city of Mendoza, though, have chosen a unique way to celebrate the bicentennial: a late autumn (early winter, really) assault on the 6,962-meter summit of Cerro Aconcagua, the “Roof of the Americas,” the western hemisphere’s highest peak (pictured above, in summer).

It didn’t go exactly as they expected, though. As the southern hemisphere winter approaches, climbing Aconcagua is a risky adventure even though, by the normal route via the base camp at Plaza de Mulas, it’s a walkup that doesn’t require any special technical climbing skills. Pacific storms drop most of their precipitation on the Chilean side - the province of Mendoza lies in the rain shadow of the Andean range - but that doesn’t mean much in Aconcagua’s case. At that altitude, there’s nothing to stop the wild westerly winds that blow the snow around even when it’s not actually snowing - visibility is limited and temperatures are dangerously cold. When it’s snowing, as it has been today, it’s even dangerous.

That’s why, given the conditions, the group from the Club Andinista Mendoza chose yesterday, the 24th, to attempt the summit - the weather forecast for today was simply too risky. According to the Mendoza daily Diario Uno, the only climber to reach the summit, 35-year-old Luciano Badino, planted an Argentine flag on the peak in commemoration of the bicentennial at 1:30 p.m. Even taking advantage of a window in the weather, he did so in temperatures that reached 40° C (also 40° F) below zero.

Meanwhile, as the climbers descend to the highway that connects Argentina with Chile via the Paso Internacional Los Libertadores, the accumulating snow is a reminder that, soon enough, the southern hemisphere ski season will begin. While the border is open despite occasional backups - yesterday also marked the end of a three-day holiday weekend for Chileans, many of whom traveled into Argentina - the area should soon get crowded with skiers. Just over the border, Chile’s Portillo is one of South America’s top ski resorts; normally, because of the rain shadow effect, Mendoza’s Los Penitentes doesn’t get the same accumulation of snow, but the early indicators are encouraging.

There are, of course, many other elite ski areas in the region, such as Argentina’s Las Leñas, Cerro Chapelco, and Cerro Catedral, and Chile’s Valle Nevado and Nevados de Chillán. As the season advances, look for more information here.
Posted by Wayne Bernhardson at 1:31 PM