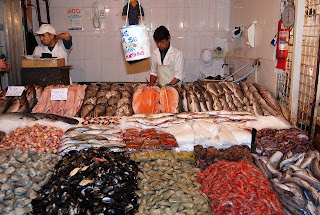 seafood on display at Santiago’s Mercado Central. When Texas food writer Robb Walsh visited the market some years ago, he marveled at “a display of fishes and shellfish so vast and unfamiliar that I felt I was observing the marine life of another planet.” Dating from 1872, the wrought-iron superstructure, decorated with the Chilean flag’s lone star, is the work of architect Fermín Vivaceta.

When I first visited Santiago, in 1979, the market - only three blocks north of the central Plaza de Armas - was not exactly a tourist attraction. Neither was Chile, for that matter, during a Pinochet dictatorship that would last nearly another decade, but the market was still a gathering place where young Chileans would breakfast there after partying all night despite an 11 p.m. curfew (which gave them no alternative to partying all night in whatever place they happened to be).

At the time, market restaurants such as Donde Augusto were relatively modest places with bargain prices for traditional dishes such as chupe de locos, an abalone casserole that’s harder to find these days as locos (as Chileans call their abalone) and other species have suffered overfishing. In the midst of the fruit-and-vegetable sector of the market, Donde Augusto and a couple other restaurants - whose prices have risen considerably - now dominate the food service, but the cheaper ones around the market's periphery are by no means inferior.

Always closed by late afternoon, as it’s primarily a lunchtime destination, the Mercado Central remains an attraction for Chileans but it now draws many foreigners as well. If dining here, though, be sure to request your fish a la plancha (grilled) rather than frito (fried), and don’t overlook the typical ensalada chilena of tomato, onion and cilantro - not to mention a pisco sour - for one of Chilean cuisine’s simplest but most appealing combinations. 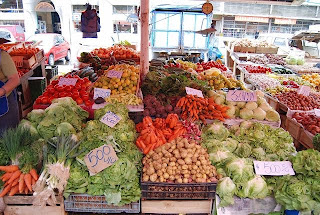 cornucopia of fruit and vegetables comparable to California - not all Chileans take advantage of it. Interestingly, according to the online Santiago Times, the new center-right government of President Sebastián Piñera is considering a junk food tax in a country where 45 percent of preschool children are now overweight or obese. Quoting nutritionist Dawn Cooper Braun, the paper reported that “Today we have 10-year-olds with high cholesterol, hypertension, and Type 2 diabetes.”

Its proceeds intended to go toward earthquake reconstruction, the so-called “fat tax” would target foods with excess sugar, 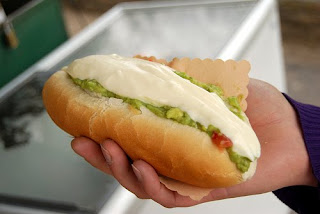 salt, and fat. The villains are the usual soft drinks and processed foods, including the products of international “would you like fries with that?” chains that have established themselves here over the past couple decades. That doesn’t mean Chile doesn’t have its own unfortunate tradition here: sold at streetside kiosks throughout the country, the completo (photo courtesy of Paul Lowry) is a cheap mayonnaise-slathered hot dog, a caloric overload that carries plenty of everything that the new tax would attack.
Posted by Wayne Bernhardson at 11:05 AM

Looks like a market well-worth visiting~
Thanks for stopping by my site.