In the past several days, there’s been news of two developments that could simplify and encourage travel between the United 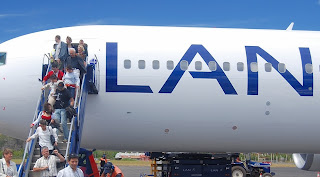 States and the Southern Cone countries of Argentina, Brazil, and Chile. One of them has immediate regional significance, while the other - a longer-term change that’s still speculative to a degree - is more far-reaching and even revolutionary, though it has complex implications.

In the first instance, LAN Perú, an affiliate of Chile’s LAN Airlines, is instituting four flights weekly from San Francisco International Airport (SFO) to Lima’s Aeropuerto Internacional Jorge Chávez (LIM), from July 1st. LAN’s fourth link to the United States - it also serves Miami, New York and Los Angeles - will offer the only non-stop flights from SFO to South America, but Perú is not the only attraction. For Bay Area travelers bound for Buenos Aires, Santiago or São Paulo, Lima’s efficient new airport will offer easier connections than mega-airports such as Los Angeles (LAX) Dallas Fort Worth (DFW), and Houston (IAH).

Besides avoiding US domestic flights, with possible long layovers, the SFO connection will mean that travelers will be able to settle into their seats immediately for the long haul to Lima. The only negative is that the 1:15 p.m. departure time from San Francisco means a midnight arrival for changing planes in Lima, but the connection should be quick and efficient (I have made this transfer several times en route to Buenos Aires and Santiago from Los Angeles, and far prefer it to going through Dallas or Houston).

Even then, LAN’s superior service should help compensate for that minor inconvenience and, at present, there are some excellent introductory fares. According to my fellow travel writer Edward Hasbrouck (author of The Practical Nomad, an incisive blog about everything to do with travel), “once the introductory sale is over, I expect that these will become the preferred, and premium, choice for Bay Area-South America travelers who are willing to pay a bit more for quicker, more convenient flights (and better service, or course, than on US-flag airlines).”

The other development is far more significant than the addition of another city to LAN’s North American gateways. According to the online Santiago Times, the United States is considering the inclusion of Argentina, Brazil and Chile in the Visa Waiver Program, which would allow citizens of those countries to travel to the US for up to 90 days without obtaining a tourist visa. This is a sore point in all three countries, which have instituted “reciprocity fees” in retaliation for the current US requirements that all their citizens obtain advance visas, which incur high per person costs and additional travel to capital cities for in-person interviews. With inclusion in the Visa Waiver Program, presumably, the three countries would eliminate such fees, which actively discourage travel to South America.

Most of the countries currently in the Visa Waiver Program are from Western Europe, along with Canada, Australia, New Zealand, South Korea and Singapore. According to Roger Dow, of the US Travel Association, the Southern Cone countries could participate within 26 months - not soon enough, in my opinion, but a big improvement over the current situation. Increased travel between North and South America would be a win-win for all four countries.

It may not happen easily, though. The current US administration recently extended the Visa Waiver Program to Greece, and is favorable toward expanding it further, but it is not without internal opposition. According to Edward Hasbrouck, in an email he sent me today, the Department of Homeland Security wants to use the Visa Waiver Program as “the most powerful readily available carrot to pressure countries to cooperate with US anti-terror measures, particularly including travel surveillance and control schemes.” If that’s the case, there could be costs higher than just monetary “reciprocity fees.”
Posted by Wayne Bernhardson at 4:18 PM