Last Friday’s “Win This Book” contest has been resolved, as Dorothy Park of Puerto Montt, Chile, correctly identified the 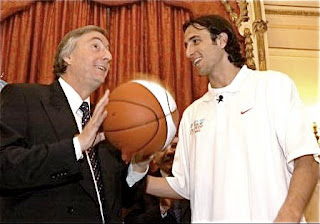 two Argentines on NBA playoff teams. Emanuel Ginóbili of the San Antonio Spurs (pictured here with former Argentine president Néstor Kirchner) is a native of Bahía Blanca, in southern Buenos Aires province), while Carlos Delfino of the Milwaukee Bucks hails from the the city of Santa Fe, capital of its namesake province northwest of Buenos Aires.

For my part, I had overlooked Oberto who, with the others, would form a decent starting five, with Ginóbili, Scola and Delfino averaging in double figures in scoring this past season. They would be a little small by current NBA standards, though, with Oberto (primarily a backup center) the tallest at 6-foot-10 (2.08 meters). Scola is 6-foot-9 (2.06 meters), Nocioni 6-foot-7 (2.01 meters), and Ginóbili and Delfino both 6-foot-6 (1.98 meters).

In fact, Ginóbili also brought something new to the NBA: in his ability to draw fouls, both offensive and defensive, he has personified viveza criolla, which Anglo-Argentine journalist Andrew Graham-Yooll (an acquaintance of mine) defines as “artful deception.” In the sports world, the most famous case of viveza criolla may be soccer legend Diego Maradona’s “Hand of God” goal versus England in the 1986 World Cup.

Artful deception is not exclusive to sports - my favorite example is the military museum director in Buenos Aires who ordered an inventory that found many valuable items missing that were later found in his garage. Ginóbili, though, probably learned it from playing soccer, where players clutch their knees in agony to try to draw a foul and then, more often than not, continue the rest of the match full speed ahead.

To take off on a tangent, Ginóbili’s success may have led other sports teams to take a closer look at Argentine athletes. Recently my 15-year-old nephew, a softball pitcher in my wife’s hometown of Olavarría, went to Buenos Aires for a baseball tryout hosted by a scout for the Pittsburgh Pirates (a “small market” franchise, with limited financial resources, that may be looking for bargains). Nothing has come of it yet, and in reality it’s a longshot despite his size and athleticism - not to mention his limited experience and the relatively weak competition he's played against. Cuban and Dominican kids of his age have been playing tough competition almost since they could walk, and he’d have a lot of catching up to do even with the gift of raw talent.
Posted by Wayne Bernhardson at 11:07 AM