Dakar Does It Again

Throughout the world, large parts of thinly populated deserts are often sacrifice areas for mining, grazing, and other 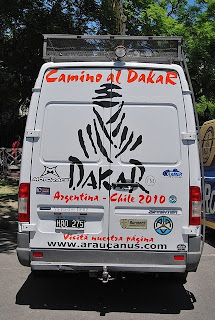 environmentally destructive activities that have damaged their natural and cultural heritage. Northern Chile’s Atacama desert is no exception but, for the last two years, there’s been a new menace: relocated from Africa, the world-famous Dakar Rally has torn through fragile archaeological sites in both 2009 and 2010, and will get the chance to do so again in 2011.

Starting in Buenos Aires, Dakar thunders across the Pampas and through the Atacama before returning to Argentina. Dakar 2010 claimed fewer lives (one) than in 2009 (three), but it did far more damage to sensitive archaeological sites - according to Chile’s Consejo de Monumentos Nacionales (National Monuments Council), the country’s Instituto Nacional de Deporte (National Sports Institute, which sponsored the Dakar invasion) is liable for US$570,000 in fines for damages to 56 archaeological sites in the Atacama region of Antofagasta, near the riverside oasis of Quillagua. The disrupted sites included lithic workshops, where pre-Columbian indigenes carved arrow and spear points, as well as Inka roads and trails. In the previous year, the IND paid only US$75,500 in fines.

Nevertheless, the cultural and environmental demolition derby will go ahead in 2011 because, like mining and grazing, it’s profitable. According to the Argentine government - not, admittedly, the most reliable source for statistics - Dakar 2010 drew four million spectators and generated US$160 million in revenue. Even if those figures are a fraction of that, half a million dollars is merely chump change for an institution like Dakar - even though the Atacama’s archaeological heritage is priceless and irreplaceable.
Posted by Wayne Bernhardson at 9:25 PM