In a recent post, I wrote about Argentina’s proposed Parque Nacional Isla Pingüinos, but I didn’t have time to add anything about the brand new Parque Nacional Patagonia Austral, recently declared along the shoreline of Chubut province south of the town of Camarones and Reserva Provincial Cabo Dos Bahías. It’s an unusual park, in the sense that it comprises only a strip of Argentina’s South Atlantic coastline, exactly one nautical mile out to sea and 1.5 km (nearly one statute mile) inland.

It also subsumes private property, and I recently visited one of those properties 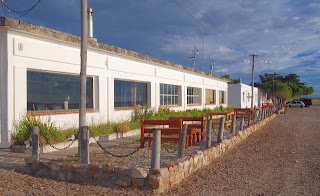 in the unique Bahía Bustamante, a sort of company town based not on mining, but on seaweed! Dating from about 1952, it once had 500 residents - most of them employees - but now has only about 40 or so. Many of them gather kelp along the shoreline; it is then dried in the sun and trucked to the Welsh-Argentine town of Gaiman, where a factory processes it into food additives.

All of the streets in Bahía Bustamante are named for species of seaweed; only a handful of the houses along them are occupied, but some of those - the former administrators’ houses - have been transformed into stylishly retrofitted guesthouses at premium prices. At the same time, there are rather cheaper accommodations with private baths and kitchens, and even some hostel facilities. In fact, it’s even possible to camp nearby, and Bustamante’s restaurant serves intriguing meals that often use seaweed as a condiment or even part of a main dish.

From Bahía Bustamante, it’s possible to take multiple excursions, including one to offshore islands 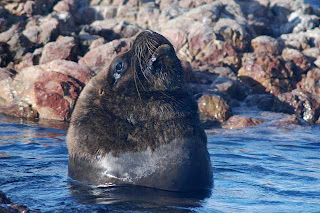 that are part of the new national park and home to thousands of Magellanic penguins, cormorants, dolphin gulls, and large colonies of southern sea lions. This is possible only at high tide, though, as the five-meter tidal range makes it impossible for the flat bottom launch to navigate at low tide.

At low tide, though, there are other options: beyond the limits of the new national park Bustamante possesses a remarkable 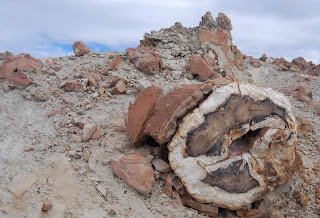 Accommodations at Bustamante’s guesthouses are all-inclusive; those staying at the cheaper accommodations pay extra for tours to the offshore islands and the petrified forest, on a space-available basis.
Posted by Wayne Bernhardson at 4:01 PM

You can also horse ride at Bahia Bustamante:-

It is an excellent location to see lots of marine wildlife and to get away from everything. Great accommodation and food too.

Thank you, Jan, for pointing this out. It's worth adding, though, that horseback riding is not part of the all-inclusive programs at Bahía Bustamante.