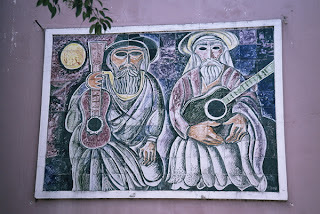 The other day I recounted the experience of taking a bus out of Retiro to San Antonio de Areco, but said little about San Antonio itself. In fact, it's one of my two or three favorite excursions for first-time visitors to Buenos Aires (the others are Isla Martín García, in the Paraná Delta, and Uruguay's World Heritage Site of Colonia del Sacramento).

San Antonio is 113 km west of Buenos Aires via Ruta Nacional 8, about two hours from Retiro if all goes well, but it feels like a different world. On its northern outskirts, buses, trucks and cars race by on the heavily travelled highway, which continues toward Río Cuarto and eventually intersects Ruta Nacional 7 to Mendoza. Slow-paced San Antonio, though, is a throwback town where motorists usually cede right-of-way to pedestrians--unheard of in Buenos Aires--and most hotels provide their guests bicycles for getting around.

Signs of San Antonio's gaucho heritage are all around, from horses and horsecarts to tiled murals. In November, it hosts the Fiesta de la Tradición, several days of gaucho-centric festivities that fill all the town's accommodations and others for miles around. Argentines romanticize their gaucho heritage much as Texans do their own cowboy history, even though many San Antonio's visitors are Porteños who have never lived outside Buenos Aires. 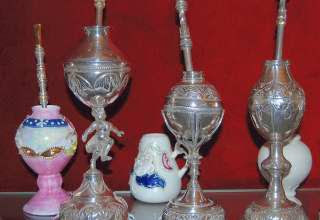 San Antonio is also home to a critical mass of skilled silversmiths and other craftsmen (and women) whose custom work is in demand around the world. The best place to see them at work is the museum/workshop of silversmith Juan José Draghi, who has clients from around the world--no bargains here, but the craftsmanship is remarkable as the mate gourds in the accompanying photograph would suggest.

San Antonio retains a representative sample of colonial buildings and many more 19th-century brick Italianiate structures, some of which have been recycled as cafés, restaurants, antique shops, and crafts outlets (again, no bargains but good values in leather and other media, in addition to silver). Some visitors may find it a little too precious, but it's tasteful, with little or no kitsch. The irony, of course, is that many if not most of the artists and crafts workers promoting the gaucho tradition have Italian immigrant surnames.
Posted by Wayne Bernhardson at 2:47 AM