Planes, and Trains, and ...Buses 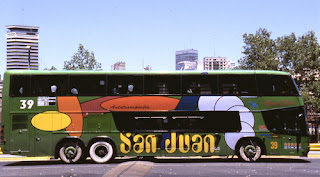 When angry passengers rioted at airport delays in Buenos Aires a couple days ago, the Buenos Aires Herald came up with the best headline: "The Latest Rage." In another incident, a train en route from Mar del Plata to Buenos Aires suffered an unexplained four-hour delay in the early a.m. before arriving several hours late with similarly irritated customers.

In reality, air traffic has been erratic for some years, and train service has been unreliable at least since the 1970s. It's been almost that long since I've taken a train in Argentina, except for suburban commuter lines in the vicinity of Buenos Aires. Long-distance buses, meanwhile, carry far greater numbers of travelers far more efficiently, to more destinations, and for that reason I'm going to address that topic today.

For most Americans, at least, bus travel is almost literally below the radar--it would hardly occur to anyone from a car culture to take a long-distance bus when it's possible to fly. Partly, I think, this is class-based: in the U.S., bus passengers are widely perceived to be undesirables, people with whom, say, BMW owners would rather not associate.

In a practical sense, it's also true that services are infrequent and often inconvenient, and routes limited. I have occasion to drive from Oakland to Los Angeles once or twice a year on heavily traveled Interstate 5, and I've never seen more than one Greyhound en route in the six-hour drive (In Argentina or Chile, over a comparable distance, I would see many dozens if not hundreds of buses).

Last year, though, when a U.S. tour operator consulted me about taking a group from Bariloche, in the Patagonian lakes district, to the coastal city of Puerto Madryn, I recommended chartering a bus rather than flying. My reasoning was thus: because there are few flights between Argentine cities without passing through Buenos Aires (the de facto hub), his group would waste most of a day in airports, backtracking from Bariloche to Buenos Aires, and then waiting in BA for the connection to Puerto Madryn (presuming they arrived in time to make the connection). Chartering an overnight bus, by contrast, would mean his clients could sleep aboard (saving the cost of a hotel room, incidentally). They would arrive rested and ready to sightsee at Península Valdés, with its penguins, sea lions, and elephant seals.

I will reassure skeptics that it's possible to sleep on board. In both Argentina and Chile, the best buses are spacious double-deckers with three wide seats, instead of four narrow ones, per aisle; there are two seats on one side of the aisle and one on the other. Those seats recline almost horizontally--rather like business-class seats in an airplane. Meals are served on board or, if not, they make regular meal stops. While few travelers might care to endure the 40-hour marathon from Buenos Aires to Río Gallegos, or its 26-hour Chilean counterpart from Santiago to the Peruvian border, for overnight trips such as Buenos Aires to Córdoba or Santiago to Pucón, these buses are ideal. Schedules are frequent and fares are moderate. One drawback, though, is the near universality of cell phones, which might ring when you'd prefer to sleep.

In researching and updating my books, I normally travel by car because I need to visit some really off-the-beaten-track sights in a short period, but I do take buses on occasion. I've almost always been satisfied with the service but, that said, there are some complications about which I'll say more in another post.
Posted by Wayne Bernhardson at 12:24 PM