The city of Gualeguaychú, a few hours north of Buenos Aires in Entre Ríos province, is known for its raucous Carnaval--it's not Rio de Janeiro, but it's the next best thing for anyone who can't afford going to Brazil. For the last 14 months or so, though, it's been in the headlines because local protestors have blocked the bridge crossing to the Uruguayan city of Fray Bentos.

Fray Bentos, which was the site of the internationally known Liebig meat packing factory for more than a century until its closure in 1979, is home to a new pulp mill built by the Finnish company Botnia. It's a complex story that could fill a doctoral thesis, but the gist is that Gualeguaychú's activists claim that the plant will pollute the Argentine side of the Río Uruguay and beaches on which the city's tourist trade also relies. Both Botnia and Uruguay deny this, and of course the plant has provided many jobs in Fray Bentos.

Uruguay, for its part, argues that blocking an international border is illegal, but the Argentine government has shown little interest in breaking the blockade. It has, though, taken Uruguay to the International Court of Justice to present a case against the mill; Uruguay, in turn, has appealed to Mercosur, the South American common market to which both countries belong, to end the blockade. The blockade is costing Uruguay money, as the buses and private automobiles that bring Argentine visitors during the summer tourist season cannot use the bridge, and alternative overland routes are far more time-consuming.

Pulp mills, of course, have a reputation for environmental contamination. Finland, on the other hand, has a reputation for state-of-the-art technology and especially for openness--it fact, the country sits atop Transparency International's annual anti-corruption rankings. It's worth adding that Transparency International also ranks Uruguay highly, second only to Chile in Latin America. In another interesting survey, Finland came in fourth of 149 countries in Yale University's Environmental Performance Index, while Uruguay came in 36th. Argentina came in 38th, just ahead of the United States.

Only yesterday, Botnia invited the protestors to tour the plant after the NGO Green Cross 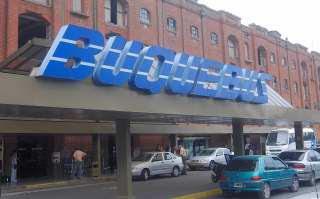 concluded that it was built to stringent European standards. The protestors, though, brusquely declined the invitation, and the blockade is likely to continue at least through the southern summer. For travelers, this will mean continued pressure on Buquebus catamaran and ferry services from Buenos Aires to Uruguayan destinations such as Colonia, Montevideo, and Punta del Este, so they should make reservations as far ahead as possible. An alternative is the Cacciola catamaran from Tigre to the Uruguayan city of Carmelo.
Posted by Wayne Bernhardson at 5:37 PM