The Traffic War in Argentina 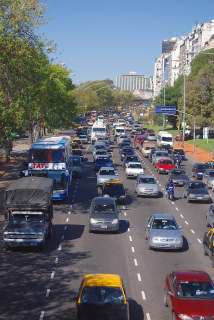 Several years ago, one Buenos Aires daily described Argentina's highways as the theater of a "Guerra del Tránsito" (Traffic War). Editorial writers regularly deplore the slaughter on the country's roads, and 2007 statistics suggest there's been no cease-fire. According to the daily Clarín, more than 8,000 people died in traffic accidents here last year, and the death rate of 28.5 per 100,000 inhabitants was higher than every other country in the hemisphere except for Mexico (28.9 per 100,000). By way of comparison (or rather, contrast), consider the figures for Brazil (18.5), Uruguay (17.2), the United States (15.0), and Chile (13.1).

Most local analyses, though, tend to place the blame on infrastructural or technical problems such as lack of freeways or the presence of older and unsafe vehicles. They're not wrong per se: narrow two-lane roads (many of them poorly maintained) can be dangerous, and I've seen vehicles with neither headlights nor taillights puttering along them.

(Lack of) Law Enforcement
Those analyses, though, regularly ignore an apparently uncontrollable epidemic of reckless, aggressive driving, and an almost total lack of professional law enforcement. It would be unfair to say that all Argentines drive badly, but enough of them do so that driving here can be an anxiety-filled experience: high-speed tailgating is rampant, for instance, and almost everybody ignores no-passing stripes. The police, meanwhile, rarely patrol the highways: in all my years, I can count the number of cars I've seen actually patrolling on one hand, and I've never seen anybody stopped for a moving violation.

The police do, though, set up checkpoints at key highway junctions. On occasion, they may detain a drinking driver, but more often they engage in meticulous document checks and uncover minor equipment defects--say, a malfunctioning blinker--that they see as opportunities for coimas (bribes). The Buenos Aires provincial police are notorious for this.

Motorcycle Madness
Motorcyclists are an issue in their own right. In theory, there's a national helmet law; in practice, I estimate compliance at about 10 percent. Among those who have helmets, more than a few carry them on their elbows--raising questions about the size and location of their brains (then again, perhaps the law only requires them to wear helmets, without specifying where). Yesterday a friend sardonically suggested that the only motorcyclists who wear helmets are motochorros--purse-snatching thieves who can't be identified as they escape on their bikes.

To my mind, though, the greatest concern is small children. It's not unusual, especially in poor northern provinces such as Catamarca and La Rioja, to see a helmetless family with two infants on an underpowered scooter--a multiple fatality-in-waiting should they lose their balance and fall in front of a passing car.

Foot Soldiers
Meanwhile, and especially in the city of Buenos Aires, pedestrians are second-class citizens. In fact, my usual advice to visitors is to realize that, as a pedestrian, you are invisible--if you doubt that, just try to make eye contact with any porteño driver. Other things being equal, motorists may prefer not to collide with another vehicle, but they appear utterly unconcerned about flattening a pedestrian. At crosswalks, even at the handful that have been touched up in the last several decades, intimidated pedestrians wait nervously until all vehicles have passed. Once, when I asked a city policeman if he ever stopped and ticketed vehicles that sped through crosswalks, his snarling response was "That's not my job!"

On the other hand, jaywalking is epidemic. My theory is that, since motorists almost universally disregard foot traffic, able pedestrians cross wherever and whenever there's an opening, at the corner or midblock, with or against the signal, even on the 12-lane nightmare that is Avenida del Libertador.

That said, in nearly 20 years of driving in Argentina, with more than 200,000 kilometers on various odometers, I've successfully avoided any traffic accident, though I've had some close calls. As a pedestrian (for what it's worth, I don't drive in Buenos Aires proper), I've also managed to avoid becoming a statistic in the traffic war.
Posted by Wayne Bernhardson at 4:23 PM