The Traffic War and the Cityscape

Not many people visited Belfast on vacation in 1978, but I did, and one of my lasting memories is the central city parking ban and the barriers that kept IRA car bombs from approaching public buildings. In Buenos Aires, similar barriers, sometimes camouflaged as planter boxes, have gone up outside Jewish community landmarks since the car bomb destruction of the Israeli embassy in 1992 and the AMIA cultural center in 1994. Fortunately such events are rare, and none has happened since then.

Such barriers are common elsewhere in Buenos Aires, but have nothing to do with terrorism--except insofar as aggressive drivers terrorize defenseless pedestrians. According to the traffic safety organization Luchemos por la Vida, about 40 percent of Argentine traffic deaths are pedestrians, and it's likely that only a few are recklessly ignoring traffic. It's not uncommon to read of speeding buses or other vehicles leaping the curb and killing or injuring an unsuspecting pedestrian on the sidewalk.

For this reason, many businesses, including corner cafés and 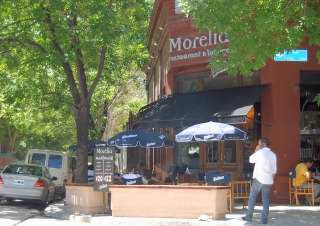 restaurants in trendy neighborhoods such as Palermo Hollywood, have erected similar barriers. Some are planters, others concrete pillars, and others sunken steel posts (I've seen plenty of bent ones). Some are more aesthetically pleasing than others, but they all permit customers to enjoy their lunch, dinner, or drinks without being crushed by a careening truck that's run a red light. Barriers also limit property damage.
Posted by Wayne Bernhardson at 2:01 PM