Separated from the mainland by the Canal de Chacao, the archipelago of Chiloé has long languished, economically and socially, compared to the rest of southern Chile's lakes district. Within living memory, the only regular connection has been the ferries that shuttle buses, 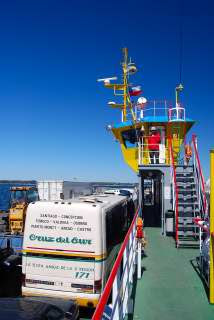 cars, trucks and their passengers back and forth between the hamlets of Pargua, on the mainland, and Chacao, on the big island of Chiloé. For a time it looked as if a suspension bridge might connect the two, but a US$700 million price tag pretty much eliminated that option.

Now, according to the Santiago daily El Mercurio, the Norwegian firm Sweco Grøner has proposed a six-km tunnel to run 200 meters beneath the channel, at a cost of "only" US$300 million. For their own commercial benefit, salmon farmers and timber companies have long pushed for a ferry-free option, but the tunnel would also simplify tourist traffic. The proposed completion time is three to five years, but it's not obvious whether the Norwegians have experience in seismically active areas such as Chiloé. Nor is it clear what the islanders, many of whom were ambivalent about the bridge, may think about this project. It would almost certainly be a toll tunnel; passenger cars pay about US$16 at present for the 30-minute crossing.
Posted by Wayne Bernhardson at 6:24 PM