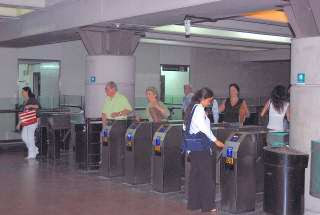 It's always easiest to take unpopular actions at a time when people are distracted by other priorities. Thus public transportation prices in Buenos Aires are going up for the first time since December 2000, a year before the Argentine political and economic meltdown of 2001-2. Prices for a single trip on the Subte (Underground) will increase from 70 to 90 centavos, while basic bus fares will go from 75 to 90 centavos and suburban rail fares will go from 50-55 centavos to 60-65 centavos. Since most Porteños (residents of BA) take their vacations in January, there's likely to be little protest in a city that's known for its protests.

That said, by almost any standard, public transportation here is extremely cheap. The Subte fare, for instance, is now about 29 US cents, while a comparable fare in the Chilean capital of Santiago is nearly three times higher, at about 84 US cents. It's also frequent and abundant; while the Subte closes around 11 p.m., buses run all night and, even at 3 or 4 a.m., it's rare to have to wait more than 10 or 15 minutes. City streets can be slow at peak hours, though, and many passengers have to ride standing up at those times (so do Subte riders, for that matter).

Meanwhile, we had our first power outage of the summer today, as temperatures rose above 35° C (about 95° F), but it lasted only about an hour. It's supposed to rain tomorrow, and Friday should be cooler. Meanwhile, I'm heading out to buy ice cream, as BA has some of the world's best.

In fact, as I headed to the corner for ice cream, it had already started raining, with lightning but no thunder, at around 9 p.m. local time. It would be great to have rain all night and a cool fresh morning.
Posted by Wayne Bernhardson at 2:40 PM