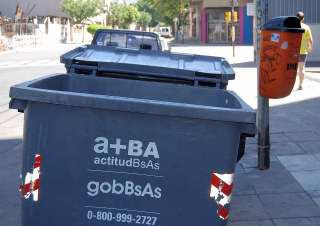 It might not look like much, but the dumpster to the right is one of the most encouraging sights I've ever seen in Buenos Aires. In the aftermath of the 2002 economic meltdown, desperate cartoneros (informal recyclers from the poor suburbs, so called because cardboard is one of their preferred materials) invaded the city in search of materials they could sell to help themselves through the crisis. In the process, they would rip open the plastic bags of household refuse that Porteños leave nightly on the curbside before city trucks could haul them away, and scatter them everywhere. Despite the economic recovery, some cartoneros even scavenge food from restaurant refuse, and the practice is not likely disappear soon. Stray dogs, not to mention rats and cockroaches, make a potential public health hazard even worse.

Two years ago, when I last visited Montevideo, it was clear that the Uruguayan capital had found at least a partial solution to the problem. On almost every block I saw, the city administration had placed such containers and its own cartoneros could rummage through them for recyclables without scattering their contents. Like Montevideo, Buenos Aires at least has started to work toward cleaner streets, without penalizing the poor for their activities. Progress in providing containers, though, has been slower than some of us might like.

In "Palermo Hollywood," the neighborhood where I took the photograph above, a woman carrying out her garbage confirmed that the cartoneros no longer fling the trash in all directions and that the streets are cleaner, but the process hasn't been without disruptions. "There are a lot of bars in this neighborhood," she told me, and "sometimes the kids here take the containers for rides after they've been partying." At least inebriated dumpster-divers aren't getting behind the wheel of an automobile.
Posted by Wayne Bernhardson at 6:27 AM