Argentine writer Tomás Eloy Martínez, author of The Perón Novel and Santa Evita, has referred to his countrymen as "cadaver cultists" who 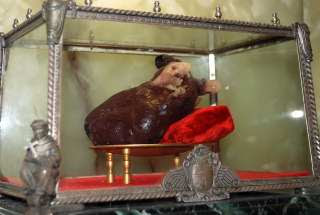 sometimes embrace the dead at the expense of the living. In a country where military conspirators abducted Evita's corpse to an obscure grave in Italy, and Juan Perón's hands mysteriously disappeared from Buenos Aires's Chacarita cemetery, strange things can happen.

One took place again yesterday, when someone literally stole the heart of Fray Mamerto Esquiú (1826-1883). Esquiú, who played a mediating role in the adoption of Argentina's 1853 constitution, is actually interred in the cathedral of Córdoba, where he served as bishop. His "incorruptible" heart, though, has long resided 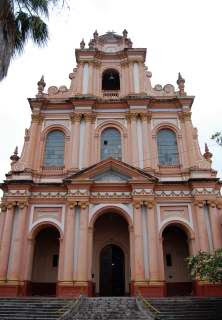 in the Franciscan church of Catamarca, about 1100 km northwest of Buenos Aires.

The heart had been on public view until about about 6:30 p.m. Tuesday, when a vandal shattered the glass case (pictured above) with a rock and absconded with it. This is not the first time the heart's gone AWOL--in 1990, it briefly went astray but was later found on the adjacent monastery's roof.

Update: Late Wednesday afternoon, Catamarca police arrested a 21-year-old Mendoza man in the theft, but there's no word yet of the heart's whereabouts.

Further update: As of Thursday morning, January 24, Catamarca police had interrogated the suspect, who admitted having been in the church but denied having taken the heart, which is still missing. His fingerprints were apparently on the glass case, but there are many contradictory stories making the rounds.
Posted by Wayne Bernhardson at 4:48 PM