Before the advent of the ATM, changing money in Latin America, especially in Argentina, was an adventure in bureaucracy--or 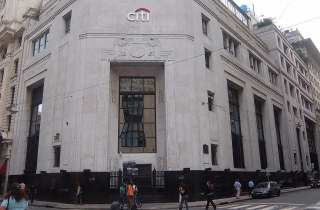 even quasi-criminality. In the days of "parallel exchange rates" (read: black market), changing travelers' checks was particularly nightmarish--I have memories of ducking into a dark back office on Buenos Aires's Florida pedestrian mall where we would nervously sign over our checks and get many more pesos or australes, far more quickly, than we would have gotten in the bank. ATMs, of course, have made travelers' checks almost obsolete, and black markets have essentially disappeared in the Southern Cone (they did make a brief reappearance during Argentina's 2002 crash).

In spending five months or so every year in Argentina and Chile, with occasional forays into Uruguay, I carry a dollar reserve for emergencies but generally rely on ATMs to get cash. Occasionally there are glitches--when I was in Argentine Tierra del Fuego in November, an Internet outage meant that no ATMs were working and I had to make an emergency run to an exchange house in order to pay for a tank of gas.

For most of the past several years, I've used a Citibank ATM card because the company's widespread presence meant I could withdraw money without paying for ATM use (though Citibank always collected a now-rising percentage per transaction). On reviewing my bank statements during the last couple years, though, I would find charges of US$1.50 per withdrawal from a "non-Citibank ATM," even though the line above it might say "Citibank, Olavarría, Argentina." Charges would accrue in Chile as well as Argentina.

Back in California, I would go to my local Citibank branch, where a manager would apologize and void the charges. Having to do so was an annoyance, but it will never happen again. That's because, shortly before I left California in late October, we received a postal notice stating that Citibank would soon collect ATM fees for all overseas branches, which are not considered part of Citibank in the US. This is exclusive of the foreign transaction fee, which is rising to three percent (from a previous one percent).

It might not be fair to single out Citibank, as the proliferation of similar fees has become rampant in both the US and other economies. One month in Buenos Aires, when we got our Fibertel cable TV/Internet bill, a friend warned me that Fibertel had started to collect an additional monthly charge for its program magazine. By canceling the magazine, which we never read, we were able to avoid a de facto rate increase.

US author Bob Sullivan has chronicled the widespread imposition of such fees, and how to avoid them, in his book Gotcha Capitalism. I've done my part by closing that Citibank account, at least. I now use a credit union ATM for my foreign exchange transactions--credit unions are far more consumer-friendly than multi-national banks.
Posted by Wayne Bernhardson at 3:46 AM