Stubbing Out the Pucho 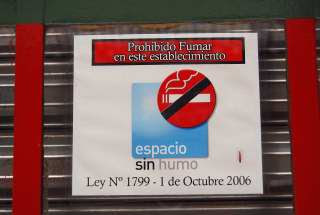 Not so long ago, entering any Argentine cafe or restaurant, especially in Buenos Aires, meant exposing yourself to toxic tobacco clouds of Parisian proportions. The city that painted itself as the "Paris of the South" was a free-fire zone and, when I first came here in the 1980s, smokers lit up in cinemas, theaters, and just about anywhere else with impunity.

Nearly all my wife's family and friends smoked heavily (she herself quit shortly after moving to California); when we would visit their apartments for dinner, I often had to flee to the balcony for an oxygen hit. Most of those family members and friends quit sooner or later, but it still seemed inconceivable that stopping smoking would become public policy. After all, a survey just a few years ago reported that three out of ten Argentine cardiologists smoked!

As of March 2006, though, Buenos Aires City Ordinance No. 1799 prohibited smoking in schools, hospitals, and other enclosed public places; following a seven-month grace period, the measure applied to restaurants, bars, cinemas, theaters, shopping centers, and similar sites. What's impressive is not the legislation per se, but the degree of enforcement and compliance--even though Argentines often evade the intent of unpopular laws, there seems to be a consensus that smoking is unhealthy and inappropriate behavior.

That's not to say that smoking has disappeared. Since smokers may still light up at sidewalk tables or on patios, they often congregate there so that, paradoxically, indoor air quality can be better than outdoors. There is also an exception for large locales able to create an effectively segregated indoor smoking area.

It bears saying, meanwhile, that my observations may not apply to working-class neighborhoods that foreigners and tourists rarely visit. For most visitors, there's little reason to visit outlying barrios such as Liniers, where compliance may be lower. For that matter, I've even seen policemen and others smoking in the Retiro bus terminal where in principle it should be illegal; once, at the city airport, a taxi driver got hostile when we asked him to put out his pucho (a lunfardo or slang term for a cigarette). Still, both the city and the country deserve credit for rapid progress in controlling tobacco abuse, and the percentage of Argentine smokers is decreasing.

Neighboring Chile has been less successful. It's enacted only a half-hearted tobacco law that lets restaurants determine whether they want to permit smoking or not; if they do permit smoking, they may not admit customers under age 18, though some have created tobacco-free areas that comply with the legislation. Bars and discos are still tobacco-friendly, and Chile has one of the highest smoking rates in the Americas.
Posted by Wayne Bernhardson at 12:24 PM