Don't Fence Me Out!

"Gated community" is an oxymoron--if fences or walls could create communities, Iraq's "Green Zone" would be a model for the world. Instead, these fences and walls, with their guarded entrances, often mark enclaves of fear and privilege, whether in the United States, Argentina, or elsewhere.

In Argentina, most so-called "barrios privados" ("private neighborhoods," also known as "countries") lie in suburban Buenos Aires province, near towns such as Pilar. In reality, they've proved less idyllic than some of their advocates had hoped--while they're not crime-ridden, some high-profile crimes (including home invasions and murders) have taken place in them.

For me, one of Buenos Aires's most appealing features has always been its public spaces, from the historic (if occasionally unruly) Plaza de Mayo to modest neighborhood squares. Near our apartment in Palermo, for instance, it's always been reassuring to see families with small children at the playground on Plaza Alférez Sobral, sometimes after midnight (Argentine parents are not obsessive about early bedtimes). Their very presence has been a strong indicator of confidence in the city's safety.

In the past year, though, there's been a frenzy of fence building in the capital. It also coincides, apparently, with long-overdue park and plaza improvements. In the Plaza de los dos Congresos opposite 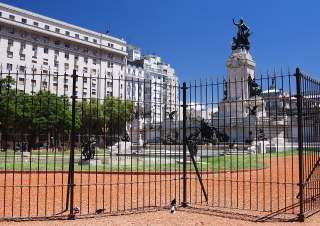 the national legislature, for instance, the monument and fountain that symbolize the Andes and the Atlantic were once covered with paint, posters and grafitti. Now, protected by a three-meter fence, they're immaculate--but also inaccessible.

Admittedly, fences may simplify maintenance, some public spaces need protection from vandalism, and others are special cases--the botanical garden, for instance, has long been fenced even though it also serves as a city park. Yet something feels wrong when the improved playground at Plaza Alférez Sobral is lifeless after the gates of the 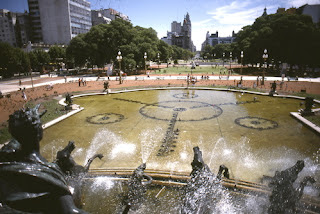 new two-meter fence surrounding the plaza are locked. And it's worse when locked gates, even in mid-afternoon, mean no one can enjoy the view over the fountains from a civic landmark such as the monument opposite the Congreso. It's a blow to community, or do you prefer the first view to the second?
Posted by Wayne Bernhardson at 12:25 PM

During our last visit, in November, the Plaza Vicente Lopez, an edenic spot in Barrio Norte, has been completely fenced in, giving it a distinctly penal air.
Dan

Wayne - Very few people liked Parque Rivadavia when it was first fenced in, but no one minds these days. The city govt gave the no-fence option a shot with Plaza Irlanda & within a month playground equipment was stolen & trash cans destroyed. It now has a fence. Plaza Rodríguez Peña was renovated without the fence... it's a very case by case situation.

The monument in front of Congress is open to the public during the day when there are no restoration works in progress. It's been a slow project on an Argentine schedule, so they must be doing some work now (or at least thinking about it).

I agree, Robert, that a case-by-case approach may be appropriate, and I think I suggested that in my original post (i.e., in mentioning vandalism). That said, I think it's been overdone (in my Palermo neighborhood, vandalism never seemed to be an issue, but the plaza now has a fence. Fences also often force pedestrians to take roundabout routes.

Even if the monument at the Plaza de los dos Congresos is occasionally open, the high fence around it is a tremendous eyesore.