Seen from the air, the vast wild landscape of Torres del Paine makes it hard to imagine that, in the calendar year 2007, Chile's iconic national 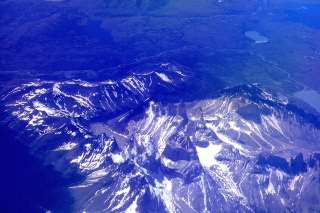 park received 128,402 visitors, nearly three-quarters of them foreigners. According to the Montevideo news agency Mercopress, so far this season, more than 1,000 visitors per day are flocking to see what, in my opinion, is at least a contender for the title of the "world's most beautiful mountain range."

This, of course, means that the park's roads, trails, hotels, backcountry huts, and campgrounds are more crowded than ever. In an earlier post, I suggested that anyone intending to visit the park should book accommodations as far in advance as possible or resign themselves to camping (nothing wrong with that, but some people seem to have been counting on finding beds or bunks as drop-ins). The new statistics, hopefully, will be an additional incentive to make their arrangements early.

In 1981, when I first hiked the Paine circuit, the park got only about 6,000 visitors per year. The route, which has changed since then because floods have destroyed some permanent bridges, was often faint. The infrastructure was minimal--hikers slept in tents, beneath 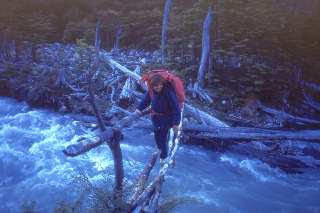 rustic lean-tos and occasionally in outside houses that were still used by shepherds. It was often precarious, as the photo to your right would suggest. Once, as I forded the Río de los Perros, the current knocked me over and I lost a camera.

Hikers were only a tiny percentage of the visitors, and few of them went far from the roads. In ten days on the trail, I met only three other people, two Americans and a Chilean (pictured above, Héctor Salas is still a good friend). As we all walked at roughly the same pace, we shared campsites and conversation every night. It was an intimate experience in a scenario of Andean grandeur.

Nowadays, it could be argued, Paine's trails are approaching gridlock: On a recent two-hour hike in a rarely visited part of the park, I still passed at least 20 people. Still, while I cherish the memories of having Paine almost to myself in 1981, it would be hypocritical of me to begrudge latecomers their enjoyment of the park and its spectacular scenery. I'm one of those hikers, after all--but Paine now is the beaten track that it was once off.

Paine deserves its celebrity, but intending visitors need to realize that Patagonia offers much more. In Chile's Aisén region, for instance, fairly few hikers enjoy the multi-day trek through Cerro Castillo National Reserve, which starts from the highway only an hour-plus south of the city of Coyhaique. According to Chilean government statistics, the reserve got only 613 visitors in 2007. Near the town of Chaitén, the ambitious private conservation initiative at Parque Pumalín is more accessible every day.

In Argentina, Los Glaciares National Park gets its own traffic and lots of detours from Paine, but Perito Moreno National Park--admittedly harder to reach--is about where Paine was 25 years ago. The Argentine town of El Bolsón has spectacular hiking just minutes from its picturesque center.
Posted by Wayne Bernhardson at 3:39 AM