Many Argentines consider Juan Perón a demagogue (or worse), and his political legacy is mixed (at best). The labor unions he encouraged could make Jimmy Hoffa's ethically challenged Teamsters look like Common Cause. It was Perón and the unions, though, who helped transform Mar del Plata from an elite enclave into an affordable Atlantic beach resort that more nearly reflects the diversity of Argentine society.

Personally, I would never visit Mar del Plata in January or February, when you can hardly walk the beach without bumping 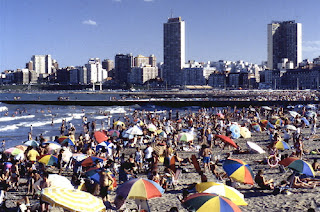 both elbows, and long lines of diners wait outside restaurants. This has been a particularly strong season despite rising hotel prices, but some middle-class vacationers have found a way to manage costs: they're staying at labor union hotels built during the Peronist heyday.

According to an article in Monday's Clarín, half the guests in union hotels this season are not union members (members have priority, but the hotels accept non-members on a space available basis). While these hotels might not have the luxuries of higher-priced accommodations, they're well-kept and unpretentious, and cost about half what a comparable private hotel does (members pay only a fraction of what non-members do, however). Regular hotel owners, however, are complaining of unfair competition, as union hotels are exempt from many taxes that others pay.

I've always shied away from union hotels, as in the recent past some had become rundown and, in any event, Argentine prices were so low that I wasn't worried about the cost. Given recent inflation, though, I may well choose one when I next update my Argentina guidebook--but I'll still go in November or December, before the crowds hit.
Posted by Wayne Bernhardson at 3:28 AM

Came by your blog via a post on the Yahoo chilegringos group this morning. We have this crazy dream to live in Argentina or Chile someday, though we need to get there first and spend some time. For now we have to be content with wonderful writing such as yours and being armchair travelers. I'll be adding your books to our collection - thank you!
Rosemary