The Robin Hood of Corrientes 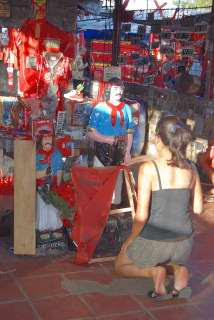 Yesterday, January 8, more than 100,000 pilgrims swarmed to a sprawling shrine just outside the Corrientes provincial city of Mercedes (population about 30,000) to remember the gaucho Antonio Gil. Gil, according to legend, was a Robin Hood figure who was unjustly executed in the 19th century but has survived in Argentine folk consciousness, especially among the poor and dispossessed. All year, there's a steady flow of kneeling, miracle-seeking visitors in economic distress, and others who come to offer thanks--and bring gifts--for favors already granted. They lug home souvenirs that are numerous and often huge--including life-size or larger plaster statues of the "Gauchito" (known affectionately by his diminutive).

Since the Argentine economic disaster of 2001-2, impromptu red-flagged Gaucho Gil shrines have proliferated alongside highways from the Bolivian border to the tip of Tierra del Fuego. In fact, the Gauchito has moved into the top echelon of Argentine folk saints with San Juan province's Difunta Correa, whose own roadside shrines are distinguished by plastic bottles filled with water. Legend says the "Difuntita" died in the desert following her draftee husband during the 19th-century civil wars, but her baby survived at her breast. There is no evidence whatsoever for this, but believers have made the Difunta's home shrine near Vallecito even larger than Gil's at Mercedes.

Devotees of both the Gauchito and the Difuntita consider themselves genuine Catholics and see nothing contradictory in their beliefs. The official Church thinks differently, though some of its more open-minded priests have tried to come to terms with ineradicable popular beliefs whose strength and durability are a mirror of the Church's shortcomings.

Argentine directors Ricardo Becher and Tomás Larriñaga, meanwhile, drew parallels between the 19th century and the present in their 2006 film El Gauchito Gil: La Sangre Inocente (Gauchito Gil: Innocent Blood), whose trailer can be seen on YouTube. For what it's worth, a Chilean rock band goes by the name of Difuntos Correa.
Posted by Wayne Bernhardson at 4:11 AM