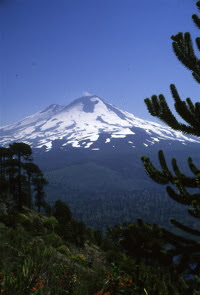 The first details are sketchy, but Chile's Volcán Llaima, east of the city of Temuco and about 700 km south of Santiago, has begun to erupt. In the Conguillío National Park, Llaima's lava flow has cut the road from the park headquarters to the north side town of Curacautín and may have reached Laguna Captrén. About 150 tourists have been evacuated, but emergency officials have so far classified this as a yellow alert, one step below the maximum red alert.

According to the Smithsonian Institution's Global Volcanism Program, Llaima is one of Chile's largest and most active volcanoes. "Frequent moderate explosive eruptions with occasional lava flows have been recorded since the 17th century," so this eruption seems to be no cause for panic. In the short term, though, it's probably advisable for intending visitors to postpone trips to the park and its immediate vicinity.

Across the border, in Argentina's Neuquén province, westerly winds have carried enough ash from Llaima that Aerolíneas Argentinas postponed flights from the airport at the city of Neuquén.
Posted by Wayne Bernhardson at 2:33 AM