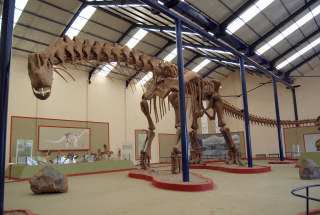 Paleontology, particularly dinosaur studies in Patagonia, is a field in which Argentines scholars have excelled in recent years. Much of the country was, in remote times, home to some of the world's greatest dinosaur specimens, and museums both in Buenos Aires and the provinces are doing an excellent job of communicating their findings to the public.

Over the last few days, I've been reading Walking on Eggs (New York, Scribner's, 2001), by Luis Chiappe and Lowell Dingus, about their discovery of huge caches of dinosaur eggs in Neuquén province. Even more importantly, they discovered dinosaur embryos within those caches, which provided even greater clues as to dinosaur evolution. Without going into great detail at this point, I'll add that Dingus and Chiappe (an Argentine who is head of the Dinosaur Institute at the Los Angeles County Museum of Natural History) have written a book that manages to communicate their findings with enthusiasm in accessible language.

I'll also add that that I had the good fortune to meet Chiappe several years ago, briefly, as he was doing a dig in Sierra de las Quijadas National Park in San Luis province (an area that resembles the canyonlands of Utah). He was very approachable, more than willing to take time to answer what, for him, must have been extremely basic questions about his work there.
Posted by Wayne Bernhardson at 7:26 PM