All Aboard? to Rosario and Córdoba? 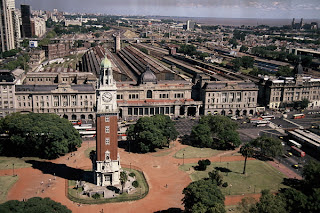 As I mentioned in an earlier post, Argentina's passenger rail system has been disastrous for 30 years or more, but that could soon change. According to this morning's La Nación and other Buenos Aires newspapers, a French group will soon start construction on a bullet train to link BA with Córdoba via Rosario and four other cities. When the project is completed, within three years, the train will cover the 710 km to Córdoba in about three hours (compared with eight or nine hours by bus, at present). A dedicated Buenos Aires station will be built at Retiro, alongside the existing stations for the Mitre and Belgrano Norte lines (depicted in the photo above).

Argentines have an almost romantic devotion, seemingly a collective memory from their early 20th century prosperity, to their passenger rail system. It's often misplaced, as the handful of surviving lines are economically unviable without huge state subsidies, and the service is appalling. In principle, though, the new line makes economic sense, as it would link Buenos Aires with two populous metropolitan areas that both aspire to the title of Argentina's "Second City." It could also make air service from BA to Córdoba obsolete--the elimination of airport hassles would make train travel time competitive with flying--and thus free up additional planes for other domestic destinations. Until it's up and running, though, it'll be hard to say whether the results justify the promise.
Posted by Wayne Bernhardson at 6:15 PM